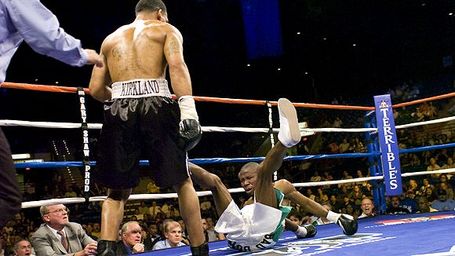 I know our regulars are quite familiar with James Kirkland, the unbeaten knockout machine from Austin, but we do get a lot of Google-led visitors that might stick around for a minute or two, read one thing, and take off, ne'er to be seen again.

If you think boxing needs more straight-up violence, you might fancy James Kirkland's brand of fighting. If technical skills are not a top priority for you, you might be a Kirkland fan. If you like knockouts and ferocity, then this is your guy.

Kirkland, 24, is 23-0 with 20 knockouts. This year, he has laid waste to Eromosele Albert on Boxing After Dark, and later Ricardo Cortes on ESPN2. He's a human highlight reel, and there's nothing sweet about his science.

Kirkland is also one of the very, very few male fighters trained by a woman. Women's boxing legend Ann Wolfe prepares Kirkland for his fights with a vast array of stamina and power-building workouts. The training camps for Kirkland have been called "savage" by some, and it's meant in a positive way.

As a total aside, if you've never seen Ann Wolfe knocking out Vonda Ward, here it is. There are few knockouts in boxing history -- men and women -- this vicious:

Like Wolfe, Kirkland is a mean-but-clean fighter, a guy built on muscle and guts. He's a steamroller, baby, a cement mixer, baby, a demolition derby.

Here's Kirkland's November 2007 ShoBox fight with Allen Conyers. This one is awesome, in particular, because it also shows Kirkland's vulnerability, which is another big attraction. He's not indestructible, but thus far he's yet to be met with an opponent that can stay up with him.

His opposition tomorrow night comes in the form of "Contender" season three participant Brian Vera, who earlier this year stunned one of the sport's top prospects, Andy Lee. Vera (16-1, 10 KO) lost early on "The Contender" to eventual runner-up Jaidon Codrington, and Vera has his issues. He's wide, he's undisciplined, he gets sloppy, and he's maybe a bit too macho for his own good -- same as Kirkland.

It makes for a compelling fight. Here's the finishing round of Vera's upset of Lee, controversial stoppage and all:

You can argue the stoppage -- and I do -- but the thing to remember is Vera wasn't supposed to be in the same ballpark with Lee. He was a step up for Andy, but nothing really tough. Lee should have, for all intents and purposes, gone through him. Didn't happen.

I guess by titling this post after just Kirkland, I'm sort of disrespecting Vera. If you've been here a while, you might remember me jumping the gun and throwing Andy Lee into the top 10 discussion at middleweight, which was quickly followed by the Vera upset. If he makes me look bad again, I throw in the towel with Brian Vera fights.

Bad Left Hook will have live, round-by-round coverage and scoring of Hatton-Malignaggi and Kirkland-Vera tomorrow night, starting at 10pm ET (HBO). For our event coverage up to this point, go here.