Share All sharing options for: Rafael: Vazquez-Marquez IV "is dead" 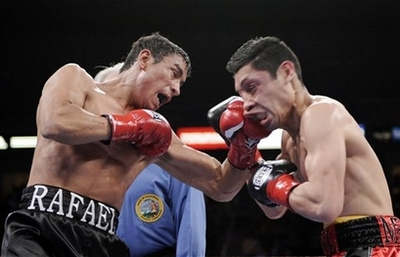 The proposed fourth fight between junior featherweight champ Israel Vazquez and Rafael Marquez, which Showtime had been eyeing for February, is dead, Marquez promoter Gary Shaw told ESPN.com. Shaw said he and reps for Vazquez promoter Sycuan Ringside Promotions negotiated the fight, which would have paid each fighter a career-high purse of $1 million, but neither side was in a rush to commit. Showtime's Ken Hershman was tired of waiting and finally withdrew his offer Monday, Shaw said. Marquez was unhappy with his purse, Shaw said.

After Showtime, which aired all three classic battles and had a right to No. 4, withdrew its offer, Shaw said Hershman gave him permission to shop it to HBO. Shaw met with HBO's Kery Davis Tuesday, but Shaw said Davis was lukewarm about it, at which point the fight died.

Dan Rafael actually answered a question similar to mine in his Insider chat today. He had this to say:

The view is that the fourth fight should be on Showtime. It is Showtime's franchise fight and HBO isn't interested in Showtime's quote-unquote leftovers, especially at the price be asked. I can't blame them. Certainly fights belong to a network so to speak. Gatti-Ward and Barrera-Morales are HBO branded fights. Vazquez-Marquez and Corrales-Castillo fights are Showtime's. You feel me?

Sadly, I don't feel it. Networks should try to book the best fights. If Showtime passes on something, and it's a good fight, I hope HBO grabs it, and vice versa. I don't care who "branded" the matchup.

What could either guy do next? If (when) Juan Manuel Lopez successfully defends on December 6, he could fight either guy and with his power, be a serious danger. It'd also renew Mexico-Puerto Rico, which is always a hoot.

The Molitor-Caballero winner will be out there, though neither present the big money Marquez, at least, seems to be looking for. There's Ponce de Leon. Vic Darchinyan has talked about fighting them, according to Gary Shaw, and screw it, that sounds good to me.

I'd love to see Vazquez recover from his second eye surgery by the first quarter of next year, call Jorge Arce's bluff, and shut his mouth. I like watching Arce scrap, but the guy is obnoxious -- he's Lil' Ricardo Mayorga. And I have zero doubt that Vazquez would beat the crap out of Arce, who was wobbled around badly by Rafael Concepcion.

A Vazquez rematch with Jhonny Gonzalez could be fun, or it could be a blowout this time around. Gerry Penalosa is always looking to fight everyone within three divisions.

Whatever they do, let's hope they come back soon. Both are can't-miss fighters and their returns will be most welcome.