Caballero gets Molitor out in four, unifies WBA and IBF titles

Share All sharing options for: Caballero gets Molitor out in four, unifies WBA and IBF titles 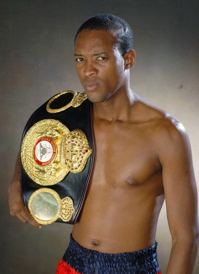 Back in March, Showtime picked up a title unification bout that American diehard boxing fans really, really wanted to see.

That night in London, David Haye smoked Enzo Maccarinelli in two rounds to unify the WBA, WBC and WBO titles. While it was hard to argue with a great couple rounds of action, it was also hard to not be a bit let down.

Again, it's hard to not be a bit let down, even though we got to see something that usually would be reserved for scouring internet streams and hoping the video isn't too choppy.

Tonight in Rama, Ontario, on Steve Molitor's turf, it was Celestino Caballero who fought like he was in his own backyard, troubling Molitor from the get-go and knocking him out in the fourth round. It was clear in round one that Molitor either had no gameplan, had a bad gameplan, or just didn't know what to do with Caballero's freakish reach and height advantages.

In the third -- which was Molitor's best round (he won none of them) -- Caballero appeared to sting Molitor just before the bell with an uppercut. Early in the fourth, he found that same punch again, and it put Molitor on the mat. After continuing, Molitor was hit four times, on his way down again, and his corner threw in the towel. It appeared that referee Luis Pabon was going to stop it no matter what.

What can you really say? There's not much to analyze. Without being mean, let's face facts: Steve Molitor got his ass kicked tonight. When he wasn't running around the ring, looking to escape Caballero's awkward charges and frustrating style, he was coming up short. Coming up short when he chose to throw at all, that is. He appeared trigger-shy, and admitted after the fight that he was as tight as everyone could see he was. He was never in the fight.

For Caballero, it's another good win for a fighter who is now deserving of a pound-for-pound top 20 consideration. There are more than 20 guys deserving of being in the talks, of course, and now Caballero is absolutely on the list of nominees. This win came against an unbeaten fighter who had largely dominated everyone in front of him, including some good pugs along the way.

I've said it before and will say it again. Caballero is no favorite of mine. I don't particularly enjoy watching him fight, I don't think he has any appreciable skill, and when the situation calls for it he's as dirty as they come. But the man is going to be trouble for anybody at the weight. It's so hard to get inside on him. He lost a couple fights, years ago. Those don't matter now. He is making a habit of beating on guys that'll fight him these days. It might be bowling shoe ugly, but he gets the job done.

Certainly a bit disappointing, but you can't fault Celestino Caballero for going out and doing his job in under four rounds, getting Steve Molitor out of there before the Ontario faithful could even really get settled in for their main event. For Molitor, it's back to the drawing board. For Caballero, he's now got two trinkets as a negotiation tactic. He'll use them.