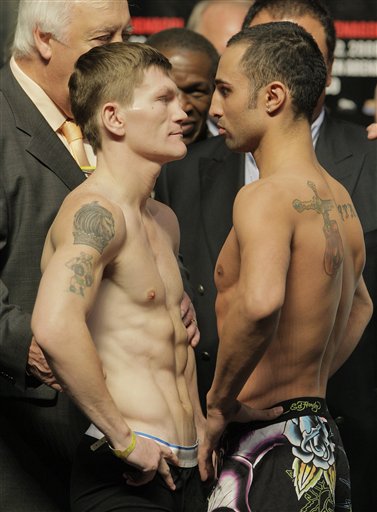 Tonight at the MGM Grand in Vegas, Ricky Hatton returns to the States on official business for the first time since his December 2007 defeat at the hands of Floyd Mayweather, Jr.

He'll face another slick American boxer when he squares up with Brooklyn's Paulie Malignaggi. Malignaggi is no Mayweather, and I'm sure even the brash Paulie would admit as much.

But this might not be the Ricky Hatton of old, either. UK boxing analyst Steve Bunce isn't the only one concerned about Ricky's mindset these days.

A breakdown of events for Hatton since that TKO manhandling against the "Pretty Boy":

1. At first, he showed humility. Later, it was mostly complaining about Joe Cortez, who has his faults to be sure, but Cortez was fine in that fight. Hatton's style was shut down by Cortez in many ways; Hatton's style is also frequently illegal in many ways. Mayweather was the guy hitting him, and Mayweather was the guy Hatton couldn't hit. Ricky's change in attitude didn't seem like "him," if you know what I mean.

2. Hatton beat Juan Lazcano in May, in a fight I felt was closer than the official cards. Juan Lazcano is no chump, but he's always failed against the highest-level fighters he's faced (save for Stevie Johnston, which began Stevie's downfall). Hatton often appeared gun-shy, took some power shots from Lazcano and got in minor trouble a couple times, and just wasn't as active or effective as he has been in the past. And this was with some biased refereeing.

3. He fired trainer Billy Graham. Some said it was about time that the world-class fighter got a genuinely world-class trainer. Others wondered where Ricky's head could be at if he was letting Billy go. Was he doubting Graham, himself, or both?

4. He hired Floyd Mayweather, Sr., to train him for Malignaggi. Mayweather specializes in slick, defensive-minded boxers.

We're hours from finding out how it all turns out against Paulie. Some lame, standardized keys to victory sort of crap? Sure!

What Ricky Hatton must do:

What Paulie Malignaggi must do:
It is a classic style matchup, boxer versus brawler. It looks like a fight that could really be very good if it plays out as it could. It could be back-and-forth, with Hatton scoring on power shots and Malignaggi frustrating Hatton a lot of rounds with his skill and speed. I've been looking forward to this one since it was announced, even if neither particularly impressed in Manchester six months ago.
We'll be here with live, round-by-round coverage starting tonight at 10pm ET. Join us!