Share All sharing options for: Points of Interest: Hatton-Malignaggi 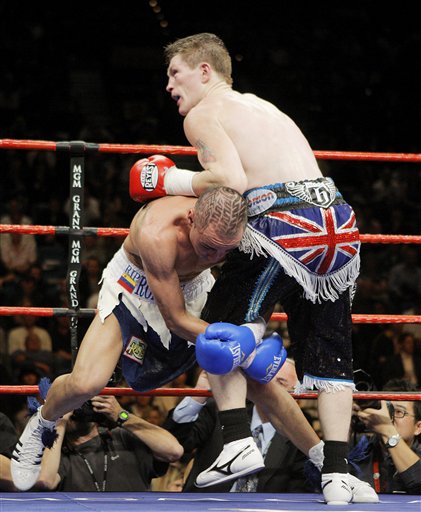 There's only one Ricky Hatton!

I'm going to have to simply agree with Dan Rafael and many others -- Saturday night was the best that Ricky Hatton has looked since his 2005 win over Kostya Tszyu. Not only did Hatton charge and rush more effectively than he has in recent years, but he did show some change, too -- change that was nothing but good.

Will Hatton ever lose his 140-pound championship? If he keeps fighting like he did last night, it doesn't seem too likely. Hatton is 44-0 at 140 pounds (1-1 at welterweight), and is likely to fight the de la Hoya-Pacquiao winner next. If it's Pacquiao, one assumes Hatton's 140-pound championship would be on the line, and I think Pacquiao has the best shot of guys who do or could fight at 140. If it's Oscar, Ricky will go back up to 147 and risk the weight for his payday and the chance to again be in THE fight.

There are good young fighters at 140, but I don't see them beating this Hatton in the next year or two. He threw Malignaggi out of his rhythm in the second round, hurt him badly (and Paulie's beard is stronger than that of Holt or Torres, and the jury remains out on Bradley), and dominated from that point on.

So far, so good for Floyd Sr. and the Hitman

As much as I think Billy Graham seems like a solid guy and would probably be fun to drink with, Ricky Hatton needed a new trainer. Graham's inability to really give Hatton any advice during the loss to Mayweather was apparent; Hatton underperformed against Lazcano again in July.

With Floyd, you have a professional trainer that isn't Ricky's friend, isn't amused by the big weight gains, and will, for lack of better words, ride his ass and make him the best he can be. And Hatton looks like a very willing student at 30 and having achieved just about all there is to really achieve in boxing. With Floyd in his corner, I don't know that we'll be hearing the constant talk of retirement anymore. OK, we probably will.

Where does Malignaggi go now?

For one thing, I won't be shocked if that was it for Paulie and trainer Buddy McGirt, even though he says there are no hard feelings. Rafael also says that McGirt's decision to throw the towel was done with "encouragement from promoter Lou DiBella and attorney John Hornewer," so it wasn't a one-man thought.

But really, Paulie Malignaggi has more about his career to examine than most 27-year old contenders do. His hands are glass, he can't punch a lick, and that's always going to have him losing to truly top-tier guys. He can shuffle and use his defensive skills and jab against guys like Ngoudjo, N'dou, Cherry, etc., but the two times he's fought truly world class fighters, he met a horrible beating at the hands of Miguel Cotto and got smacked around pretty good by Hatton, too.

These guys who aren't overwhelmed with what Paulie's good at will always beat him. He can have a damn nice career, hold world titles, defend them, and outbox folks. But he's never going to be the guy. He's a tough customer and if his hands were "normal," he'd probably be able to ride the rocket a little higher. Paulie is fully aware that his career can only last so long, and he's making the most of it. This was probably the most he'll be able to make. He got a shot at the champion, did his best, and that's that.

It was a butt ugly fight, really, but the TV opener between James Kirkland and Brian Vera was certainly fun to watch. Kirkland won every round en route to an eighth round stoppage after Vera was knocked down for a third time, but we certainly got to see Kirkland pressed more than most times out, and certainly more than his other 2008 fights where he met almost no resistance.

Vera is sloppy, badly-balanced and leaves himself wide open. He's also very slow-handed and not an especially heavy puncher, in part because he throws such looping, swooping punches. But he did catch Kirkland time and again with a loaded-up right hand, and at one point caught him with three of them in a row before Kirkland finally blocked one. That'll be a problem for Kirkland. A better puncher definitely rocks Kirkland with some of those shots, and might have him in real trouble.

Kirkland's vulnerability, we always say, is part of what makes him so interesting. But he's going to have to be more willing to actually defend himself when he steps up and fights the next rung of opposition, and then higher. Vera showed exactly how easy Kirkland can be to hit.

During the fight Larry Merchant mentioned that it's rare for a Kirkland-like fighter to reach the highest echelon of the sport, because he meets a boxer that can take a shot and run circles around him at some point. As much as I like JK, I'm pretty sure that's where we're headed with him. It'll be damn fun along the way, though, because he comes to fight and he can punch.

But hats off to both of the Austin natives, who put on the show everyone expected. Kirkland remains a load of fun to watch, and Vera is tougher than leather.

Does perception of Hatton change?

I think even Hatton's biggest fans with brains wouldn't have argued that Ricky was looking a little bit faded post-Mayweather. There were concerns in so many rumors and reports and all that about his psyche, how the loss had effected him, what it had done to him as a person and as a competitor. Struggling somewhat with Juan Lazcano did him no favors; the somewhat nasty split with Billy Graham added fuel to the fire.

But showing up and fighting three minutes a round all the way against Paulie Malignaggi made him look like the no-doubt best 140-pounder, and may have even brought him back some of the shine that Mayweather check hoooked off his face last year.

Ricky will kick back, hopefully enjoy the holiday season, and await the result of Oscar-Manny to find out what he's most likely doing next.