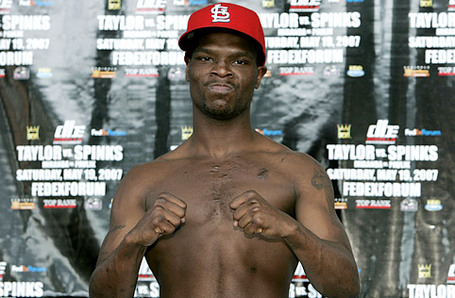 The IBF has decided to fill its 154-pound title vacancy with a fight between ex-titlist Cory Spinks and young Deandre Latimore, who upset Sechew Powell this past summer on ESPN2.

The title was given up by Verno Phillips, who beat Spinks via debated decision in March. Phillips is taking a fight with Paul Williams this Saturday, for another vacant 154-pound title.

The 30-year old Spinks (36-5, 11 KO) is also a former welterweight world champion, but is probably best known by most boxing fans as one of the most loathed talented fighters of his era. There aren't many outside of St. Louis that I think would honestly say that they like watching Cory fight. He's very good, but he is generally a bore. The March fight with Phillips not only couldn't find a home on American TV, which necessitated Don King to stream it online, but it was a very disappointing live draw in St. Louis, too.

The 23-year old Latimore (19-1, 16 KO) looked very good upsetting Powell in June, but the fact of the matter is that Powell just did not compete, and I'm not sure how much we learned from that fight about Latimore, who has not faced a top opponent otherwise, if you choose to consider Powell a top fighter. He was booked as an opponent, but Powell didn't show up and he lost. Sechew also tested positive for marijuana after the fight.

I'd guarantee he's never fought anyone as slick or smart or frustrating as Cory Spinks, but Latimore is a southpaw mirror for Spinks, and he has real skills. Also like Spinks, Latimore was born in St. Louis, though he now resides in Las Vegas.

It's nothing against Spinks, but I am rooting for Latimore to beat him. He's got a lot of future left. That said, I have to favor Spinks.