Share All sharing options for: Darchinyan-Arce on for February 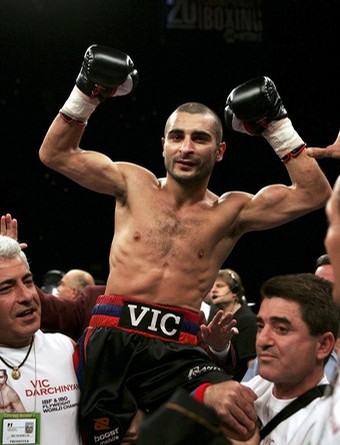 After a couple of years of trash talking, both sides saying they wanted the fight, and a couple of losses on either side delaying anything serious moving forward or getting signed, the long-awaited guaranteed slugfest between Vic Darchinyan and Jorge Arce has been signed.

The bout will take place on February 7 on Showtime.

Darchinyan will defend his unified junior bantamweight titles against Arce at the Honda Center in Anaheim, Calif., on Feb. 7 in the season premiere of "Showtime Championship Boxing."

Darchinyan, an Armenian living in Australia, and Mexico's Arce had been building toward a match last year as they trash-talked each other and stoked fan interest.

There are some fighters and some matchups that cannot be less than absolutely excellent TV. These two guys always bring action, and they seem to genuinely dislike one another, to boot. Darchinyan's destruction of favored Cristian Mijares has thrown him back into the spotlight, and the popular and flamboyant Arce has done nothing but win since beating Mijares, though anyone but Arce will tell you he's certainly slowed a bit.

Still, the slowing of Arce has not removed him from his spot on the sport's ten biggest action stars, a list for which Darchinyan is a staple, too. Arce, for me, regained his action stardom for sure during his wicked slugfest with Rafael Concepcion in September.

It should be a hell of a fight, for as long as it lasts. And I wouldn't expect it to last too long. These guys are going to throw bombs.