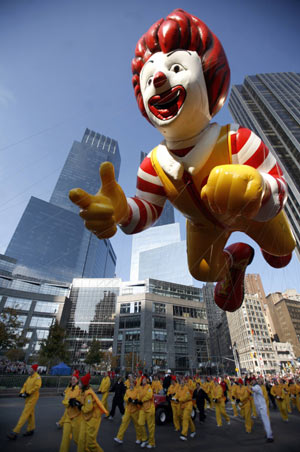 Hope everyone has a safe and happy holiday weekend, and that if you go out on Black Friday, you remember to wear steel-toed boots. Happy Thanksgiving, everyone!

The big news in Oscar-Manny Land this week is Oscar's rotator cuff, which you may recall he mentioned after his fight with Ricardo Mayorga a couple years ago. The word is that it's still bothering him, and hampering his training significantly. The linked article by Ronnie Nathanielsz even indicates that this may be the secret Freddie Roach was talking about as to why Oscar can't pull the trigger anymore on his left hook, which used to be his best punch. It also implies that the injury caused Oscar to abandon an effective jab when fighting Floyd Mayweather, Jr., in 2007.

We'll just kind of have to wait until fight night to get any real judgment, since I doubt HBO's cameras for 24/7 will be focusing much on Oscar's injuries. That's no way to sell a fight. And even if his arm was falling off, Oscar and his team would downplay the injury as much as possible.

There are also ten thousand hysterical articles out there about Manny Pacquiao fighting Ricky Hatton next, and here's one of them. It's a great fight, and I love the idea. There may be no two fighters in the world who have the dedicated, rabid fanbases of Hatton and Pacquiao. Stick that baby in Wembley Stadium and watch the place sell out. It would be wonderful for boxing, and it'd also be a good fight even if you put it in the Thomas & Mack Center -- and let's hope they don't.

In other Ricky Hatton news, word is starting to simmer a bit about a Mayweather-Hatton rematch in 2009, according to David Mayo. I still think Mayweather has his way with Hatton, but of the two big-money rematches that will be out there for Floyd until he finally stands on top of a mountain and firmly declares that he will never fight again and then chops off one of his hands, it's a fight with Hatton I prefer over another fight with Oscar.

Mayweather-Hatton was the better fight, had the better atmosphere, and is the one I still like to watch every now and again. You'd also get the Mayweather Family Saga that was the selling point of Floyd-Oscar II (since you couldn't promise much of a fight), and plus you throw in Ricky Hatton's verbal jabbing skills. It would sell. You have to remember there are still those who felt Hatton was robbed to some degree by referee Joe Cortez, and that there are a lot of folks that would love to see that rematch.

Bob Arum told Primera Hora (linked from BoxingScene.com) that he's sent Miguel Cotto's team an offer to fight Michael Jennings in February, and that he'll either have to take that fight or likely sit out until a summer 2009 rematch with Antonio Margarito, which is coming whether Margarito beats Shane Mosley on January 24 or not. Cotto-Jennings has been rumored to be paired with a middleweight championship fight between Kelly Pavlik and Marco Antonio Rubio in a split site affair that HBO has turned down but could still wind up as a Top Rank-produced pay-per-view.

I don't really get why they want to do two venues; save money and stick them both at Boardwalk Hall. Pavlik and Cotto both have fans on the East Coast, and one loss isn't making either of them less desirable to see. Neither one matchup is a big seller, but putting both stars on the same card should do a fine house in Atlantic City, wouldn't you think? There's got to be more to it than just that. Cotto-Jennings doesn't excite me, but Pavlik-Rubio sounds like a hell of a fight.

Two great stories, one link: Rick Reeno of BoxingScene.com says that Andre Berto's mandatory defense against Luis Collazo is likely headed to HBO for January 17 or January 31, and that's good news. Collazo may not be a truly top-tier fighter, but he'll present Berto with a stiff challenge; at the very least, a lot stiffer than Michel Trabant, Miki Rodriguez, and Stevie Forbes. Collazo is a natural 147-pounder with good skills, and he's a southpaw. He is a tough nut to crack. Ask Ricky Hatton.

The second story in that link is the better one, though. Sampson Lewkowivz, adviser to 154-pound contender Sergio Martinez, absolutely ripped Sergio Mora, the brief WBC junior middleweight titleholder, for turning down a $250,000 offer to be in the co-feature against his fighter. Lewkowicz and promoter Lou DiBella were said to be "shocked" by Mora turning the fight down.

"He is no longer Sergio Mora, he is Sergio Moron. He will never be on HBO or Showtime again. The only thing he can do is continue fighting on 'The Contender.' He is a pussy, not a champion."

...tell us how you really feel, Sampson.

Rumor is also going around that Marco Antonio Barrera will fight for a 135-pound title in April, either against Nate Campbell in a WBO mandatory -- unlikely since Campbell is due to fight Ali Funeka in February, his IBF mandatory -- or for an interim title, likely against some schlub that Barrera can handle without much trouble. The last part of that was my own editorial feeling. I am a huge Marco Antonio Barrera fan, but I just don't care.

In a final, very sad note, Bad Left Hook sends our best wishes to the family and friends of longtime referee Toby Gibson, who was found dead at his home in Las Vegas on Monday. Mr. Gibson was 61 years old, and had been working the fight game for a quarter of a century. His final fights were in Vegas on Saturday, as he was the third man in the ring for two fights on the Hatton-Malignaggi undercard, including Ricky's brother, Matthew, beating Ben Tackie. Rest in peace, Toby.