Share All sharing options for: Mondays with Boxers: November 3, 2008

Welcome to November, friends! I'll be watching the second 24/7 episode for Calzaghe-Jones on demand later because I missed it last night, and I'll do a "live" thing like last week for that. I'm also working on a feature article sort of thing for the Calzaghe-Jones PPV. For now, enjoy the quotes, of which there were relatively few. Sort of a quiet week. 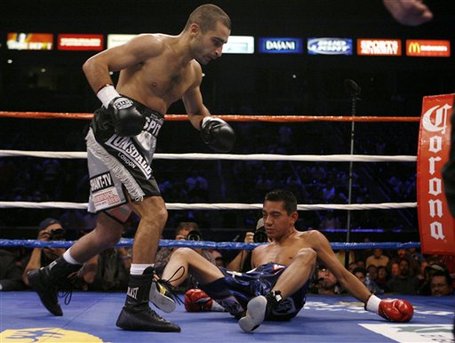 THE TECHNICAL PROWESS OF DEFENSE DARCHINYAN

"Each round I caught him with a left hand, (but) I didn't go stupid, I promised everyone I'd make it a skilled fight." -- newly crowned WBA/WBC/IBF junior bantamweight titlist Vic Darchinyan (Sporting Life)

"I've never fought anyone with his style." -- the vanquished Cristian Mijares

"All the writers -- did I keep my promise? Did I? I told you what I would do. I said I was going to destroy him and knock him out. I delivered." -- Darchinyan, during his post-fight interview on Showtime

"If I told you the other fights he wants, you wouldn't believe me. He wants to fight Marquez and Vazquez. When he said Marquez, I had to ask him, 'Who's Marquez at 115?' He said, 'No, Marquez at 122.'" -- promoter Gary Shaw on Darchinyan's fight requests (Cliff Rold -- BoxingScene.com)

"I definitely won't miss getting punched in the face for a living." -- Buckley (Los Angeles Times)

AND NOW TO MR. MODESTY

"It always seems to be the case that you get more credit and respect when you have gone. It happens a lot and I’m sure it will be the same when I retire." -- Joe Calzaghe, still saying he's going to retire after Saturday's fight with Roy Jones, Jr. (Wales Online)

"Beating Bernard Hopkins was the icing on the cake and I suppose this fight with Jones has to be the sprinkles or the cherry." -- Calzaghe

"I can guarantee I will be back to my best because this is my last fight and I want to go out with a bang." -- Calzaghe, bless him, working hard to sell this fight

I'M SO BAD SOMETIMES I SCARE MYSELF

"If he's serious, I am more than ready to fight him." -- 122-pound champion Israel Vazquez, on a potential clash with fellow Mexican action star Jorge Arce (Double B Publicity)

"I'm tired of Arce, tired of people asking me when I'm going to shut him up. My message to Jorge is watch my last fight with Rafael Marquez. Watch very closely and decide for yourself if you really want to fight me." -- Vazquez