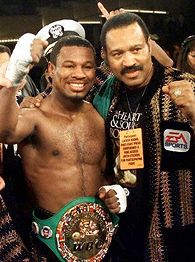 It may not be shocking, because it's happened once before. But it is still a bit surprising to hear that Shane Mosley, who looks to fight Antonio Margarito on January 24, has fired his father and trainer Jack Mosley, claiming the two are "not on the same wavelength."

If Shane felt it was time to split professionally from his father, then he made the right choice. If the two were not working together well, as he suggests, then he definitely made the right choice. A fight with Margarito is one that many inside boxing have openly criticized, feeling Mosley is too old and not strong enough to seriously challenge Margarito. You may recall Lou DiBella, who has no direct interest in either fighter, saying that Margarito would send Shane out "in a pine box" following Mosley's dramatic, 12th-round knockout of Ricardo Mayorga in September.

My thinking that night was also that there were rounds and periods of the fight where Mosley just seemed like he didn't quite know what he wanted to do. His hesitation cost him some rounds against a guy he can box circles around, who doesn't hit hard enough to hurt him without catching him flush on a haymaker he can easily avoid. Mosley says in the ESPN.com article that training camp for the fight didn't go well, that he and Jack were clearly not clicking, and that he first considered making the change during camp. That would explain a few things to me, but I'll also still contend that Shane Mosley is just not a junior middleweight, either.

The other fight that had been discussed was Mosley taking on DiBella's young welterweight titlist, Andre Berto, a guy that Mosley said reminds him of a younger version of himself, which is real praise.

But as much as I think Shane clearly showed a lost step or two against Mayorga, I don't think Margarito is suddenly infallible because he beat Miguel Cotto. The man has flaws. He has subpar hand speed, doesn't move around well, and if unable to catch a quick, in-and-out fighter, he's simply not going to land all those wear-down punches he did against Cotto.

I said when they brought it up that I like the fight, and I still do. Mosley says he's agreed and that the fight is close to being finished. It'll be on regular HBO, which is good news for us. And if Mosley is going to hire a new trainer (which he obviously is), then I can't think of a better fit than Nazim Richardson.