Update: We WILL cover Calzaghe-Jones tomorrow night, and I'll be on the radio, too

Share All sharing options for: Update: We WILL cover Calzaghe-Jones tomorrow night, and I'll be on the radio, too 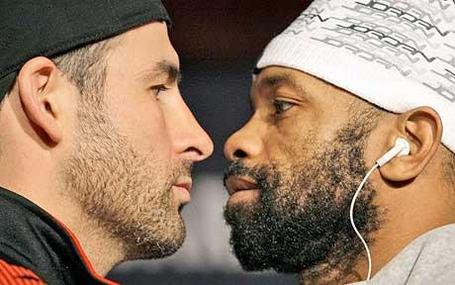 By deciding to split the cost with Bloody Elbow staffer Brent Brookhouse, my economic crisis concering tomorrow night's Joe Calzaghe-Roy Jones, Jr. pay-per-view has been solved amicably and without much trouble. Only when I met with other great leaders could I decide on the best course of action.

That means, my friends, that Bad Left Hook will have live, round-by-round coverage of Calzaghe-Jones and all three awful undercard fights. I still would genuinely encourage people to save their money; hey, I'm saving half. My selling point was that I gave strong consideration to Abraham-Marquez at $24.95, and that fight is a wipeout waiting to happen, and not nearly as intriguing as Calzaghe-Jones, nor is it as important.

So I flip-flopped, but we'll be live tomorrow night, which is good news for everyone.

Also, I'll be a special non-MMA guest on 106.7 WJFK's MMA Nation with Luke Thomas (also of Bloody Elbow) tomorrow to talk about Calzaghe-Jones. Both Luke and I are big proponents of the two sports' fanbases getting together a little more often, and it's an honor to be invited to talk boxing on the show. You can listen in with this link tomorrow; I should be on at about 6pm ET.