Breaking down Calzaghe-Jones: What each man must do

Share All sharing options for: Breaking down Calzaghe-Jones: What each man must do 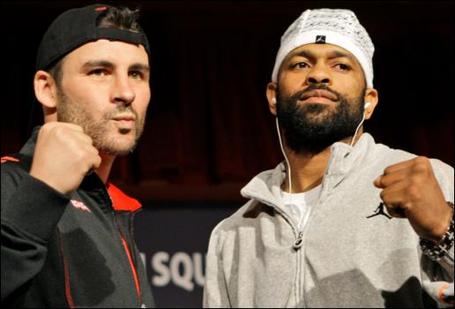 I have been a fairly big critic of tonight's HBO pay-per-view, but I want to further make two things clear.

1. I am most vocally critical of the horrible promotional job that Calzaghe and Jones did putting together an undercard, as they were obviously underfunded and are offering us complete garbage with a smile on their faces.

2. I do think this is an interesting fight, and I am very aware of why it's happening. For Calzaghe, he's making a great payday and fighting a legend. For Jones, he's got a chance to erase a Hall of Famer's "0" as he nears 40.

Usually I'm not especially keen on simple, "What each man/woman/team has to do to win!" breakdowns, but this is a fight I see clearly going one way, and there are only a few things that can be done to stop that. So instead of prattling on with my usual nonsense, I'll just keep it simple, stupid.

What Roy Jones, Jr., must do to once again become light heavyweight champion of the world
I'm not going to B.S. you with the line that this is "the most anticipated fight of the year," because it's not. Ticket sales have proven that. Calzaghe-Jones is a fight between two of boxing's elder statesmen; one of whom is still at the top of the sport, the other going for broke, essentially, to get back to that plateau.
We WILL be here with live, round-by-round coverage tonight, starting at 9pm ET. All three dreadful undercard fights (Figueroa-Augustus could be a good fight, I'll give it that) and then the big main event for the light heavyweight championship. We hope you'll join us!