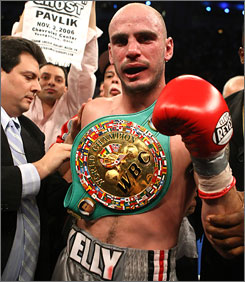 And we go from sort-of praising the WBC right back to sort-of bashing them.

Jose Sulaiman and Co. are threatening to strip WBC titlists Kelly Pavlik (middleweight) and Manny Pacquiao (lightweight) for failure to pay sanctioning fees. Dan Rafael had this to say about the two cases:

[T]he WBC said it will strip Pavlik of its belt if he doesn't pay sanction fees for his last two fights, neither of which were title bouts. He faced Jermain Taylor and Bernard Hopkins above 160 pounds in matches the WBC was not affiliated with, yet it is still demanding fees.

he WBC is also demanding payment of sanctioning fees from Manny Pacquiao for his last fight, when he knocked out David Diaz to win the organization's lightweight title. If Pacquiao, who faces Oscar De La Hoya at welterweight on Dec. 6 in a nontitle match, does not pay the WBC within in 15 days, he will be stripped.

I can't think of any better way to put this than how Dan Rafael himself put it in his Friday chat at ESPN.com:

"They are insane. I hope none of their guys pay sanctioning fees and they are all stripped and there are no more WBC titleholders."

I am, however, unclear about one thing. Pavlik's last two fights were not against Hopkins and Taylor, but rather Hopkins and Gary Lockett. Lockett may have been a WBO mandatory, but the WBC title was also on the line, if I recall correctly.

The WBC absolutely always looks out for No. 1, but you can't ignore that these fighters know they have to pay sanctioning fees, and if they fail to it's not the WBC's place to go, "Ah, but you're a good fighter, forget about it."

Of course, I tend to reject the notion of sanctioning fees robbing the fighters of their purses and these irrelevant trinket sanctioning body titles to begin with, so I might be more liberal in the boxing world than some folks.

I do assume Pavlik and Pacquiao will pony up and this will all be settled without much to-do about it, but it is bothersome that the WBC would consider Edwin Valero-Antonio Pitalua worthy of naming a replacement for Pacquiao, or whatever nonsense they'd come up with to replace Pavlik, who has all but formally agreed to fight WBC mandatory Marco Antonio Rubio.