Share All sharing options for: Calzaghe's decisive win proves little, but does matter 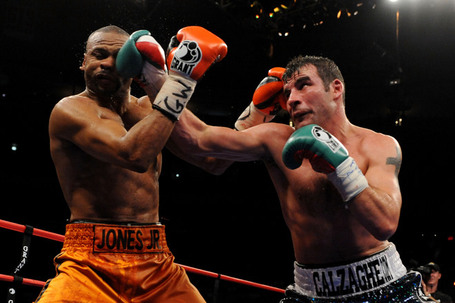 Joe Calzaghe's showboating, hard-punching, blood-drawing dominance of 39-year old Roy Jones, Jr., last night at Madison Square Garden has sparked one important question, which we talked about in the live thread last night, and has been addressed by a couple of you here already.

Let's ignore the boxing journalists that tried to sell you the line of B.S. about Roy Jones having a chance in this fight. They "had a feeling," they "just felt it" -- whatever. And I'm not trying to be smart-assed or jerk-y, either. But anybody that went into this fight feeling like Roy Jones had a better than, I dunno, 10% shot at beating Joe Calzaghe was (1) delirious, or (2) simply nostalgic, wishing for one more great performance from Jones, the man who inspired many to stick with the sport in the 1990s.

So did the 36-year old Welshman, unanimously in the world's top three pound-for-pound, prove much of anything? Did he add anything sincere to his legacy?

No, he didn't. Jones' name made this fight as big as it was, and sister, it wasn't that big. Calzaghe beat a man against whom he should have been a prohibitive, clear favorite. Calzaghe over Jones should've been thought of sort of like Obama against McCain in the state of New York -- you don't really need to wait for the precincts to report. Sure, anything can happen, but it's going to take a minor miracle.

As for the legacy part, I think of it this way. I do a little baseball scribbling, too, and Hall of Fame voters in baseball are obsessed with plateaus and flat achievements. Kirby Puckett was voted into the Hall of Fame because his great career ended early; same for the more famous, more era-revered Sandy Koufax, who came from a time (as many old boxers do) when apparently there were no flaws in the good athletes, and today's bunch could never play with them. My feelings on that load are better left for another time, but anyways...

Puckett and Koufax both deserve admittance, but Puckett's the better case for this comparison. Would he have reached 3,000 hits had his health not become such a factor? Maybe. Probably? Did he need to? No. Would it have REALLY made him a better player? Absolutely not.

3,000 hits, like this Jones win for Calzaghe, would simply have been stat-padding at the end of the career. Craig Biggio, a great player, recently did the same thing. He hung around enough to get the 3K -- he wasn't any good while he was chipping away at the mark, but that is neither here nor there, I suppose.

Calzaghe will always be able to say he beat Roy Jones. The harsh reality is that Jones-Calzaghe was not a fiscal possibility back when both were in their prime. Sort of like pitting the '27 Yankees against the Big Red Machine, it is simply a matchup we'll have to dream about.

So no, the fight and the win told us nothing about Calzaghe that we didn't already know. It's not his fault, and the win does matter because he did beat what is still a good fighter and one of the 10 best at 175 pounds. Jones, though old, is no bum. His own limitations were his downfall, but let's not forget that it was Calzaghe that pushed Jones into the ropes and the corners at his discretion, where he opened up on him with flurries, featuring some harder punches than many are used to from Calzaghe.

It was Joe Calzaghe in there making Roy Jones look that bad. Outside of the Glen Johnson beatdown, I'd call this the biggest beating Jones ever took. 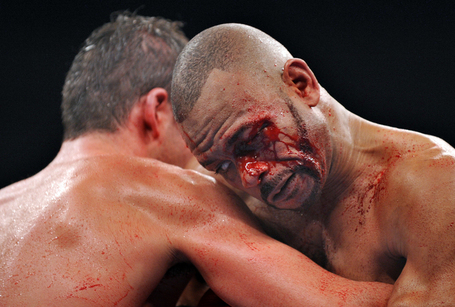 What now for Roy Jones?

Let me make another thing clear, and this speaks more to why Jones should hang them up than anything else, I think. Jones' first round knockdown of Calzaghe may have been more a wrist shot than a clean punch, but that happens, and the fact of the matter is Joe Calzaghe was hurt. He wasn't punch-shoved and tumbled over like against Hopkins; Joe was hurt. When Calzaghe came back to his feet, Jones didn't press.

It is that level of hesitation and fear of taking risks that I think tells me, at least, that Roy needs to get out of the ring. He's had a phenomenal career, and he fought with guts last night. He was outgunned, fought at points simply to not get further hurt, and his corner gave him little help with a bad cut. It's time to hang it up.

Jones gave his fans hope in that first round, but it was a fool's hope. I will admit that I, too, thought the amazing might happen, but I also felt it had to happen very quickly. Otherwise Calzaghe would get his legs back, regroup, and outbox Jones. That's what happened.

Roy Jones cannot pull the trigger anymore. And there's no reason for him to keep fighting on.

Roy has done things in this sport that few will ever hope to do. Pound-for-pound king, and unquestioned, for about a decade. Titles at middleweight, super middleweight, light heavyweight and heavyweight. There aren't many guys that debut at 157 pounds that move up to win the WBA heavyweight strap.

He's made his money, and his promotional company is growing, slowly but surely. He offered no excuses last night, was gracious in defeat, and would go out fighting the man at the top. I cannot think of a single advantage for Jones to stick around. There's nothing to gain, only things to lose.

At the end of it all, the two men promised a good fight with action, and they delivered that. I can't ask for more. I hope Jones steps aside, and I hope Calzaghe fights on, because he still has a lot to offer in the ring. He may annoy me sometimes, but it's been a good while since I questioned him as a fighter. He's one of the best.