Be dialing! Act now! Joe Calzaghe available for a limited time only!

Share All sharing options for: Be dialing! Act now! Joe Calzaghe available for a limited time only! 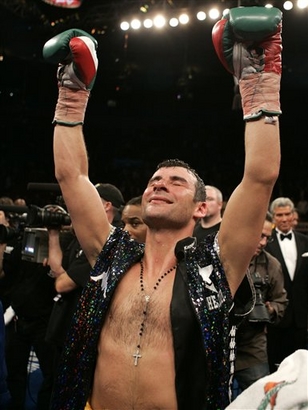 If anyone out there wants a crack at light heavyweight champion Joe Calzaghe, his father and trainer Enzo says they'd better speak now, or forever hold their peace.

[Enzo] warned that if anyone wanted to fight the Newbridge boxer they would have to move swiftly because once Calzaghe did retire he would stay that way.

"His mum is begging him to retire and he has nothing more to achieve," Calzaghe senior said.

"Whatever he wants to do, I'll back him. If he doesn't want to box, he gets my blessing because there's no more to achieve.

"But if he wants to carry on boxing, keep boxing now, don't retire. Once he's retired there's no coming back, I don't want him coming back.

"Retired means retired. Not retired for two years and come back after. No way.

"If he stays on I'm fully behind him. I hope the offers come now, then he doesn't have to retire. Once he's retired and they come with the offers it's no good."

The biggest problem is going to be the fact that there's not a whole lot out there, really, and there are so few major money fights for Calzaghe that I don't see anyone coming up with something that will make him jump at a fight. Let's think about some of the possibilities, even those that really aren't.

Calzaghe said before he fought Jones that he didn't want to fight Hopkins, saying the fight was dull, a rematch would probably be worse, and that he'd already beaten the 43-year old legend, so why do it again? I have to admit I agree with him on every count. Hopkins beating up Kelly Pavlik doesn't change that Calzaghe ran Hopkins tired in a butt-ugly fight this past April, one that HBO didn't even try to sell on pay-per-view.

It's not a marketable fight, even now. Calzaghe's November 2007 fight with Mikkel Kessler did poor ratings in the States, even though it was a good fight, a great matchup, and HBO did what they could to promote it. Hopkins-Calzaghe, while important, was no huge success. Pavlik-Hopkins died on pay-per-view. As great as we all know both men to be, I think we also know their fight won't be pleasing to watch. This one won't happen without some unbelievable money offer, and even though both guys have hot names at the moment, I don't think Golden Boy or anyone else is dumb enough to want to lose money on their fight.

Dawson is carrying the IBF and IBO titles around, having taken them with authority from Antonio Tarver in October. Dawson-Tarver couldn't even sell out The Palms in Las Vegas. First of all, a fight between the Connecticut-based Dawson and Tarver, who is popular in the Tampa/Orlando region, had no business taking place in Vegas without there being one or even two more attractive fights to go with it. This reliance on Las Vegas has got to stop. That was an East Coast fight that they misplaced.

But beyond not selling, Dawson just doesn't have the name recognition. He's 26, he's strong, he's pretty quick, he's fresh, and he's tall, at 6'3". Calzaghe won't fight Dawson for any number of reasons. Pick your favorite. If you have an ax to grind with Calzaghe and his career, please press the "Fear" key. If you do not, press "Logic" or "Business."

Perhaps as a UK farewell, Calzaghe and Woods could do a big fight in Cardiff. It's not the fight it once may have been, back when Woods declared time and again he was willing to fight Calzaghe, only for Calzaghe to never sign on to do so. There may be enough money and enough nostalgic sentiment for Calzaghe to do this one, though I'd put money against it.

Save perhaps for Hopkins, Kessler was Calzaghe's toughest test, and he remains one of the best in the world. He inherited Cazlaghe's crown as the best fighter in the world at 168 pounds. Given Kessler's post-Calzaghe business decisions (ducking out of an agreed-upon fight with Edison Miranda, then beating overmatched Dimitri Sartison and Danilo Haussler), I wouldn't bet that Kessler is anxious to take another crack at Calzaghe.

Froch is busy at 168, but if he beats Jean Pascal and wins one of Calzaghe's old straps, his name would bring a bit more to the table. This could be a UK farewell, too, and yet another chance for Joe to quiet a big talker.

There are a few more that could potentially be possible (Taylor, even Pavlik still) but I just don't see a fight on the horizon that will make Calzaghe stick around if he's serious about bowing out unless he gets a big, attractive fight. I didn't even mention Glen Johnson, who's too dangerous, or Tarver, who has lost too much credibility.

Anyone you can think of?