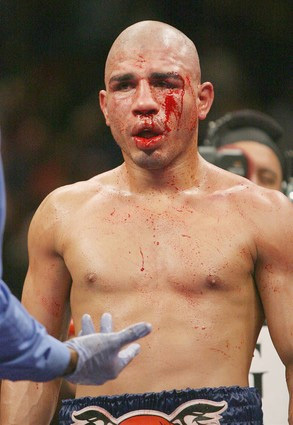 Following their first career losses, middleweight champion Kelly Pavlik and welterweight contender Miguel Cotto look as though they'll return to the ring in a co-main evented pay-per-view from Atlantic City (Cotto's fight) and Ohio (Pavlik's fight), if we are to believe the rumors.

Cotto (32-1, 26 KO) will be facing the UK's Michael Jennings (34-1, 16 KO) for the WBO welterweight title that Paul Williams recently vacated. Jennings has been the WBO mandatory for a good while now, and though he's barely a blip on the international radar, he...um...hmm. Nah, I can't really try to hype this up. On paper, Cotto-Jennings is a mismatch.

In the other headliner, Pavlik (34-1, 30 KO) will look to come back from his one-sided loss to Bernard Hopkins when he makes the second defense of his middleweight crown against mandatory challenger Marco Antonio Rubio (43-4-1, 37 KO), who impressed with a rugged win over Enrique Ornelas on the Pavlik-Hopkins undercard.

HBO passed on the doubleheader, which is kind of surprising given the fact that it's a legit world championship fight and then a star feature co-main event, but it probably just didn't fit into the budget. If the El Nuevo Dia report is to be believed, Cotto will make about $3 million to fight Jennings. Given the current economy and the two disappointing pay-per-view buyrates Pavlik has done in 2007, this just might not have made financial sense.

Arum's pretty much doing the only thing he can with the show, which is take it to self-produced PPV. Hopefully, he'll not overshoot and try to charge 50 bucks for this, because if he does, it'll crap out and hard. It's not a bad double-header, but it's also pretty much for diehard fans only.