Sergio Medina claims he took a dive after death threats

Share All sharing options for: Sergio Medina claims he took a dive after death threats 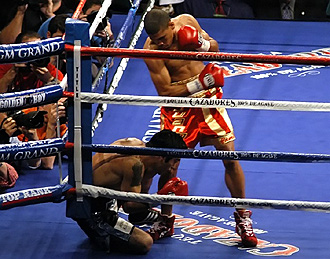 Argentinian fighter Sergio Medina has made the claim that he received a death threat if he didn't go down in the first round against WBO junior featherweight titlist Juan Manuel Lopez in one of the featured undercard bouts last Saturday in Las Vegas.

Medina, who was harshly criticized by the HBO broadcast team and just about every fan that watched the event, including myself, gave his side of the story to El Nuevo Dia.

"During the weigh-in they [people associated with Lopez] told me if I didn't throw the fight in the first round, I wouldn't leave the United States alive. What hurts me more is that I was prepared for 12 rounds, but I had to throw the fight because I was very afraid. I was nervous before the fight, and didn't want to fight. It's known that there was a certain amount of money being paid out if Juanma stopped me in the first round. I swear on my daughters that what I'm saying is completely true. They threatened me, so I threw the fight."

Medina's claims are serious business, and are neither easy for him to back up or easy for the Lopez camp to prove to be false. It's one guy's word against the word of others, unless Medina has people that can back him up with this stuff, which wouldn't seem too likely.

With all the businessmen and hobknobbers around the weigh-in stage, you'd think someone would have overheard something. Someone important enough to do something about it. Or at least that's what I would think, but that's just me thinking.

Medina claiming he threw the fight leaves this matter open to serious investigation by the Nevada State Athletic Commission, and if he cannot get it proven that he was threatened, it's unlikely he's ever going to fight on American soil again.

Here are the facts about the fight as we know them:

2. Lopez landed nine of his 37 shots, and with those nine punches put Medina on the canvas three times. None of them were particularly hard-looking blows, but then again none of us are the ones being punched by Lopez, either.

3. Medina genuinely did not look interested in being in the ring. This is observation far more than fact, but I wrote it off as conditioning. I thought he just wasn't in good shape at all, wasn't feeling well, and didn't come to fight.

It's a tough, tough story to talk about because there are two very extreme outcomes here. Either Medina just dusted his entire career outside of Argentina -- which is far more likely if only because it's going to be hard to PROVE anything -- or the Lopez camp is in some real hot water.

I'm not one for conspiracy theories or the fixing of the sport being a genuine problem that is hurting the sport, but this isn't something to just brush off either. It's a criminal claim he's making. It's no joke.

I'm sure more will develop.

(Photo is © German Villasenor for DoghouseBoxing.com)