The show starts live tonight at 8pm ET on the Versus Network. This fight is for the vacant World Cruiserweight Championship. The Ring has IBF titlist Cunningham ranked #1 and former light heavyweight titleholder Adamek ranked #2.

The undercard features Joseph Agbeko FINALLY defending his bantamweight title against William Gonzalez. Both guys can punch. Agbeko hasn't been in the ring in 15 months. Not sure if Devon Alexander's fight will be on TV, but they've got two hours blocked off so I'm hoping it is. He'll be facing Christopher Fernandez in an eight-rounder. 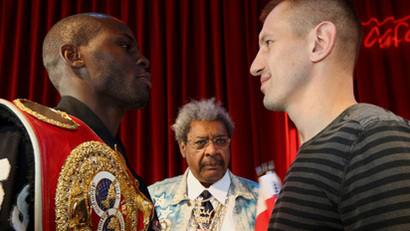