Sergio Medina admits he lied about threats from Lopez camp

Share All sharing options for: Sergio Medina admits he lied about threats from Lopez camp 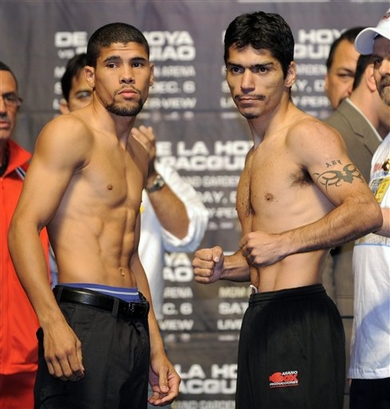 Sergio Medina (pictured, right) nearly started the biggest scandal to hit boxing in many years. Stating just yesterday that he took a dive in his Saturday night loss to Juan Manuel Lopez after being threatened with death if he didn't go down in the first round, the Argentinian fighter has now recanted. (Original link in Spanish.)

"I believe this affects my career," he said of the gloriously stupid lie he tried to pass off as the reason this gutless disgrace to boxing crumbled in less than two minutes against a fine young fighter whose name has thankfully been acquitted but nonetheless had it needlessly dragged through the mud.

There are few things off the top of my head that I could name that are this cowardly. To discredit your opponent and accuse associates of his of engaging in a very serious criminal act in a pathetic attempt to make yourself look better is not just cowardly, it's worthy of a total blackballing.

I'm not trying to ignore the fact that maybe Medina really does have some sort of problem that requires serious attention. But if that is the case, that's another reason he does not belong in professional boxing, period. Men with fragile psyches are a danger to themselves in the boxing business. It's not one where failure is uncommon, nor is it one that won't bruise the ego. If he has a genuine problem, I wish him the best with that.

But it's going to be hard to forgive Sergio Medina for this disgusting display. He attempted to slander not just Lopez and his team, but the entire sport by association.