Adamek tops Cunningham in a barnburner

Share All sharing options for: Adamek tops Cunningham in a barnburner 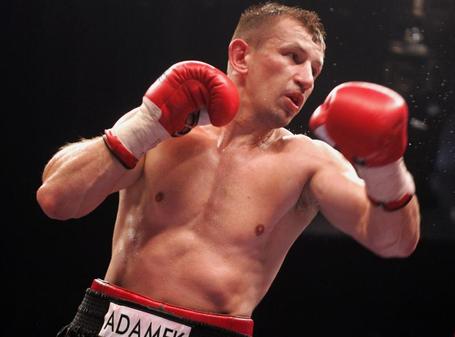 Former light heavyweight tilist Tomasz Adamek knocked Steve Cunningham down three times, but the fight was in doubt until the official scores were read after a thrilling bout that no doubt takes its place among 2008's Fight of the Year contenders.

Adamek, performing for a wonderful crowd in Newark that heavily favored him over the Philadelphia-bred Cunningham, put the now former IBF titlist down at the very end of the second round, again in the fourth, and yet again in the eighth.

The fourth round knockdown was the most interesting, as Cunningham was so dominating the round that it would have been 10-8 for sure. Suddenly, Adamek snapped him back and floored him, and that changed it to at least a 10-9 round for the Pole.

This is a fight that has rematch written all over it. There's not a better opponent for either guy, and Cunningham has a case although he didn't whine about the scoring or anything, saying simply that he beat himself by going away from his strengths. I scored the fight 113-113, with "U.S.S." Cunningham showing great heart down the stretch, winning the final three rounds on my card. Overall, Cunningham won seven of the 12 rounds for me, but those two 10-8 rounds for Adamek tied it up.

Official scores were 114-112 Cunningham, and 116-110 and 115-112 Adamek. Adamek not only wins the IBF title from Cunningham, but more important for us diehards, he is now THE world's cruiserweight champion. He's the man in the division. He's the real deal.

The TV opener between IBF bantamweight titlist Joseph Agbeko and challenger William Gonzalez was also a hell of a good scrap, making this without question the best non-HBO or Showtime TV card of the year for American fans, and really pound-for-pound, these two fights may well have made for the best night of boxing on American TV in 2008. Hats off to Versus and Don King, and the fighters, of course. Agbeko won a grueling 12-round decision to retain after being out of the ring for 15 months.