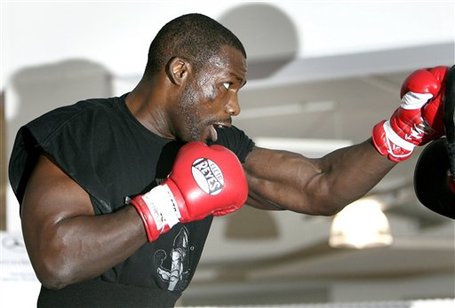 Hasim Rahman has decided to dump longtime trainer Marshall Kauffman in favor of the more famous Buddy McGirt for his Saturday fight against Wladimir Klitschko. And yes, it is Friday.

Kauffman says he was in camp with Rahman up until Wednesday, and that he's not sure of the details of why Rahman's tune so dramatically changed about being his chief second. He's also being polite and taking a "that's the business" stance, which is very gracious of him. Frankly, I'd probably be more bewildered than anything.

Kauffman also says that Rahman is in great shape and that he expects Hasim to come in around 238 pounds for the fight with Klitschko, which would be his lowest weight since his 2006 loss to Oleg Maskaev, which was also his last high-profile fight.

I don't mean to dis Buddy McGirt, really, but 2008 has not been his finest year, and really he hasn't been going too hot for a good bit now. He threw in the towel on Paulie Malignaggi on November 22, which was the latest in a series of defeats for McGirt's fighters. Also notable have been Lamon Brewster's one-sided beating at the hands of Klitschko last year, Antonio Tarver's lopsided loss to Chad Dawson, and Vernon Forrest's rather embarrassing empty gas tank loss to Sergio Mora, though that one was emphatically avenged. He also all but assumed chief second duties in the corner of Eddie Chambers this past January, when Chambers gave a fight away against Alexander Povetkin.

On the topic of the fight, Brian Doogan wrote a weird article at ESPN where he seems to assume that Hasim Rahman being tired at a press conference after having just flown over to Germany means he doesn't care about the fight. Still, it did give us this quote:

"Suddenly, there are some names in heavyweight boxing, which we have not had in the past couple of years," Klitschko said. "Samuel Peter and Calvin Brock were not so good."