Marquez and Diaz on course for February or March

Share All sharing options for: Marquez and Diaz on course for February or March 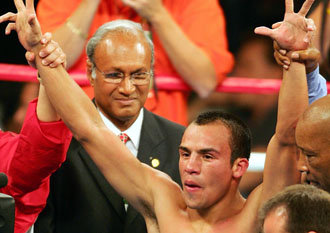 Golden Boy CEO Richard Schaefer moved a step closer to putting together a fight between lightweight champion Juan Manuel Marquez and former titleholder Juan Diaz on HBO for Feb. 28 or in March. "Marquez has accepted the fight and Diaz has accepted the fight," Schaefer told ESPN.com. "Now, it's a matter of finding the money. Assuming they each get paid X, they have agreed to fight. Now, I need to find X."

Marquez-Diaz is a hell of a fight on paper, and should be easy enough to get done if both guys really want it. They're both under the Golden Boy banner, the fight looks good for TV in every way, and it's the legit world champion against a legit challenger. You can't ask for much more -- I guess you could ask for Marquez-Campbell, but that's just not in the cards given Campbell's situation.

I also think Diaz has a VERY good chance of unseating the 35-year old Marquez. I don't think it's so much that JMM has slowed down, but Diaz is a hell of a good fighter and still getting better. He's got fantastic stamina, punches in bunches, and is very accurate when he's at his best.

Still, Marquez should be the obvious favorite. He's among the three best in the sport pound-for-pound and you can't make that guy an underdog against anyone but Pacquiao.

Marquez also knows he has to keep winning to have a chance at a third fight with Pacquiao, which he desperately wants. He says he'll fight Pacquiao at any weight.

Schaefer also said that part of the deal with Marquez to get this fight is that it won't be held in Diaz's hometown of Houston, where the fans came out in a big way last September to see Diaz and Katsidis, plus Rocky Juarez against Jorge Barrios. It's understandable.