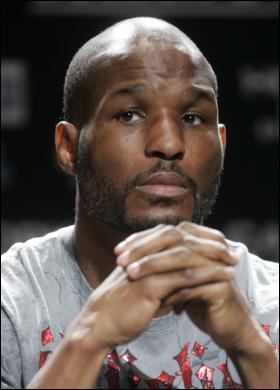 "I don’t know where he’s been, on Mars or something," Hopkins said. "Maybe he missed the numbers that (Oscar De La Hoya-Manny Pacquaio) generated – 1.25 million pay-per-view buys in a recession. That’s 70, 80 million dollars in revenue. And he’s says boxing is dead?

"Maybe it’s dead when he fights."

Hopkins was just getting started.

"If he wants to retire, he should go ahead and retire and keep his mouth shut. He has his wins, his undefeated record. He should go join his family. Other than that, he should shut up. And tell him Bernard says that."

This is pretty much the stance a lot of the boxing world has taken in regard to Calzaghe's "boxing is a dying sport" statements. In his chat this week, Dan Rafael's reaction was, basically, "Screw Calzaghe."

I'm kind of in the same boat. I respect Joe as a fighter, I respect his career as much as is possible, and I think he's one of the best in the world. He's a great fighter.

One of the big things here is I think we're all sick and damned tired of hearing this boxing is dying, boxing is dead talk. It's not. We know it. So we don't need one of the best fighters in the sport spreading this moronic myth around any more than it already gets spread around by the yokels that don't watch boxing and thus don't know anything about it.

The "boxing is dead" talk comes from people that simply don't know anything. No, it's not as popular as it used to be, but this started a long time before MMA became a highly-watched sport in the States.

Calzaghe's comments are annoying because -- as Hopkins is saying -- it just reeks of jealousy. Again, I think the world of Joe Calzaghe as a fighter in the squared circle. Honest to God, I do. But American fans do not care about Joe Calzaghe. His style of fighting is absolutely unappealing for a lot of people, his record has been crapped on on by 80% of the boxing web sites people read (and without newspapers caring, online coverage really matters in boxing), and I don't mean to sound biased against him, but he's smug and kind of hard to like.

I can't imagine Joe Calzaghe appealing to American fans in general, which may well say more about Americans than it does Joe Calzaghe, but the fact is with all his accolades and titles and all the good things you can say about him, he's a non-factor in America as far as fan interest goes.

Fortunately for Joe (and yeah, I realize I'm going off-topic a bit), boxing's popularity is not confined to America. It is still wildly popular in Germany, in England, in Japan, in Canada, in Mexico, in Puerto Rico, etc.

I do think Hopkins is right about Calzaghe looking at his own failures to draw on American PPV and American TV (neither Hopkins-Calzaghe nor Calzaghe-Kessler exactly lit up the ratings) and deciding that it must be some fatal flaw in the system. It's not. It's just that he's not a capable of being that guy. Sorry no one wanted to pay 50 bucks to see you dismantle a washed-up Roy Jones and three club fights, Joe.

I have no worries about the state of boxing. I don't think you can easily replace Oscar, and the only fight that's doing a million domestic buys might be Floyd against Manny (and that one would need some wicked promotion and a better economy), but that doesn't mean there aren't huge fights and great fights to be made all over the sport. The reality is this: a fight doesn't have to sell a million on pay-per-view to be a great success or a memorable attraction. To think that it does is horribly off-base.

As far as Calzaghe saying Oscar isn't a full-time fighter and hasn't been a top fighter in years, Hopkins had this to say:

"That’s jealousy, envy," said Hopkins, a partner in De La Hoya’s Golden Boy Promotions. "They [Calzaghe vs. Roy Jones Jr.] didn’t do well on pay-per-view, under 300,000. So when you start hearing things like that, it’s just jealousy.

"It’s easy to kick someone when they’re down. I’m not saying this because I’m his friend and a partner, but Oscar’s record speaks for itself. Look at what he’s acccomplished over 20 years."

And every single one of them was money in the bank for everyone involved, so point taken there, too.