We've got a new poll up on the right sidebar for 2008 Fight of the Year. Your votes won't count as far as my list goes or anything, but hey, voting for things is fun. 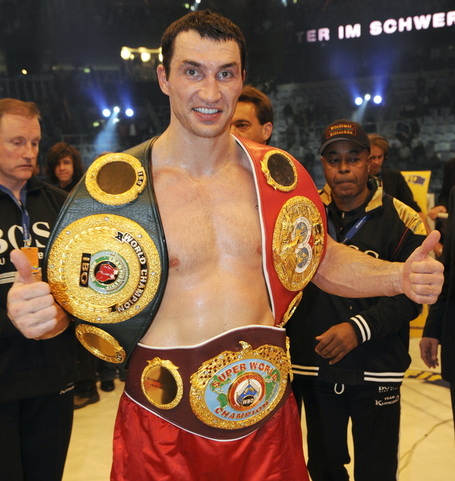 Will anyone fight this man? Anyone?

But why on earth would he want to be more vulnerable? As it's become, he's damn near impenetrable.

Looking at Klitschko's three fights from '08, you have this:

February 23: A beyond routine win over Sultan Ibragimov, who presents no resistance and still manages to win two rounds on my card simply because Klitschko did even LESS in those two rounds. The highlight of this fight was either Ibragimov's tackle, or HBO showing highlights from Duddy-Smichet.

July 12: Tony Thompson wins two of ten rounds before Klitschko stops him in the 11th. Hey, at least he stopped him.

December 13: Late replacement Hasim Rahman proves as ineffective, washed-up, and out of his depth as we all figured, losing every round before Tony Weeks stops it early in the seventh. Rahman fights about as hard as Ibragimov did, but Rahman has the decency to go down.

Wladimir fights who he's given. He was supposed to face Alexander Povetkin on Saturday, but Povetkin came up lame in camp. It happens. I think he probably would have wiped Povetkin out, too, but it doesn't really matter. Outside of his brother, I just don't see anyone that's really going to challenge him.

The last time we got to see Wlad flat-out wreck a guy was Calvin Brock in the fall of '06. Wladimir was cut, felt the urgency, and destroyed Brock. If he fights Chris Arreola or David Haye, he'll have guys that are going to throw punches at him. You know what that probably leads to? Klitschko knocking the crap out of either of them. Haye is a lot of fun, but Monte Barrett gave him some wobbles. Travis Walker put Arreola down. Outside of a perfect blast, Klitschko isn't getting stopped by either, and the only way they're beating him is stopping him.

Such is life when you dominate, but I think it's worth some small discussion. In a different world, where Wladimir and Vitali are not brothers but are the exact same fighter, do you pick Wladimir over Vitali, even at this stage of both careers?

For all the righteousness (including a WBC investigation coming up) about Shane Mosley using EPO once, years ago, it's like nobody bats an eye that James Toney has failed a post-fight drug test on multiple occasions. All we hear is what a wonderful throwback he is, such a delight to watch perform, and if you don't like watching the out-of-shape, blown-up middleweight fight lame, dreadful bouts at heavyweight, you're clearly not appreciating his art form.

I get it with Toney. He was a spectacular fighter up through cruiser, and he's been a legit heavyweight contender, which is a lot more than you might have thought to ask of him in his prime. Still, the guy has given the sport a black eye more than once, and nobody seems to care. The "boxing person" has a fascination with Toney. Is he really that charming?

He's charming enough to have robbed Fres Oquendo of a win on Saturday, which is just another chapter of the careers of both men, and it's the same as the rest of them. Toney is given a gift by judges, Oquendo gets one taken away from him. You can argue Oquendo deserved a win over Evander Holyfield a couple years ago, and he didn't get it. That fight was closer than this one. Oquendo beat Toney. Toney should be retiring or marching his way down the ladder to fight on with deluded hopes of winning a title again.

Instead, you know what'll happen? JT will worm his way into a title shot sooner than later. Someone will pull out of a title shot, someone will need an opponent, someone won't want to take a real risk. I mean, it's not like co-WBA titlists Ruslan Chagaev and Nikolai Valuev are against the soft touch. Valuev is fighting a man closing in on 50, for God's sake, while Chagaev comes back to fight Carl Davis Drumond (26-0, 20 KO), who will be fighting outside of his native Costa Rica for the first time. He's 33 years old, I should mention, and his best win is a debatable decision against Kelvin Davis.

Ah, what a division. Most insulting might have been Barry Tompkins calling Toney-Oquendo "an action fight." Get some new glasses, Barry.

Demetrius Hopkins is not a fighter

I don't like getting all personal or crappy about fighters, really, but D-Hop never impressed me before Saturday and failed to do so again. Kendall Holt deserved better than a split decision, as it boggles the mind what fight Julie Lederman watched at ringside. Hopkins, whose best win is a stolen victory over Stevie Forbes, did enough to win some rounds and make it appear competitive scores-wise, but it really wasn't. He never had Holt in any trouble, Holt was the pursuer all night, and Hopkins didn't even do what he does best, which is jab a lot and work some off of that.

I question whether or not this is really the career Demetrius wants when I watch him fight. That could be totally off-base, of course. I'm just some dork watching TV. But he seems to lack not just fire, but ANY fire. It seemed clear he was well behind. He never stepped it up even for a moment in those last few rounds. Why not? D-Hop isn't a big puncher, but Holt's been down eight times in his career. He's really vulnerable.

I still quite like Andre Ward, but of the Olympic Andres at 168, give me Dirrell, especially now that he's intent on bringing it. Ward, I think, may soon be lapped by Daniel Jacobs, too. He looked good coming back from the knee injury to waste Esteban Camou, but bad knee injuries have a way of coming back.

Yuri Foreman is quite talented. He predictably took James Moore to school in front of a hostile, pro-Irish crowd in Atlantic City. I still can't say I enjoy watching Foreman fight -- Cory Spinks has been his comparison before, and it's a pretty good one. His skill is evident, but he's not exciting, ever.

The great thing about Shawn Estrada beating up Shaun Spaid is we got to see a fight that would usually happen in some boxing club or armory on national TV, and then no more than five minutes after Barry Tompkins and Wally Matthews did the hard sell on Spaid as a toughman veteran with no fear, they lambasted the athletic commission for even allowing him to fight. Have it one way or the other. Yeah he was overmatched badly and it was a total farce and Spaid shouldn't have been in there, but had TV cameras not been rolling, would ANYONE care?

Versus showed some clips of Malik Scott's eight-round win over Raphael Butler between fights, though I'm not sure why they picked that fight over Eddie Chambers' eight-round decision win against Cisse Salif. Neither win is really impressive, but Eddie might actually win something someday if he has a great night and an opportunity. Malik Scott is now 32-0 and has only twice fought a 10-rounder. Maybe those two should fight each other. On second thought, let's not give ESPN producers any ideas.

Exactly one month after a dreadful split decision loss to Grady Brewer, Cornelius "K-9" Bundrage came back in Germany to upset Zaurbek Baysangurov with a fifth-round stoppage. Go figure. Baysangurov came in 19-0 with 14 knockouts. He had a wide decision win at 154 pounds against upcoming middleweight championship challenger Marco Antonio Rubio, back in 2006.

Raul Garcia successfully defended the IBF strawweight title in Loreto, Mexico, beating Jose Luis Varela for the second straight time. I'm not sure why they had a rematch, given that Garcia beat him on scores of 118-110 across the board just three months ago, but hey.

The man Garcia beat for the title, Florante Condes, was back in the ring in the Philippines, beating woefully inexperienced Ronel Ferreras via technical decision after five rounds (48-47, 48-47, 47-48).

Beibut Shumenov improved to 7-0 by beating rugged veteran Epifanio Mendoza in Bellevue, Washington, which is quite a nice win to have in your seventh pro fight. That's no joke opponent by any stretch. Mendoza pressed Jeff Lacy in a brawl this year, and he fought Chad Dawson last year without embarrassing himself for the four rounds it lasted. Shumenov is being fast-tracked like crazy. He did two fights against nobodies, one against veteran can Shannon Miller, and since then it's been Donnell Wiggins, Lavell Finger, Montell Griffin (yes, that one) and now Mendoza. And he shut Griffin out. I don't care how old or washed-up Griffin is, to shut that guy out over 12 rounds in your sixth pro fight is an accomplishment.