Dawson-Tarver II: This time it's obvious!

Share All sharing options for: Dawson-Tarver II: This time it's obvious! 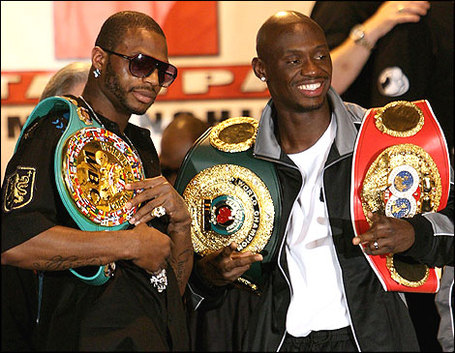 This year, the day after I turned 26, boxing's gift to me was the rematch between Juan Manuel Marquez and Manny Pacquiao, another thriller between arguably the world's two best pound-for-pound fighters. This time around, I won't be so lucky.

Dan Rafael reports that Antonio Tarver will get a rematch with Chad Dawson on March 14, the result of a contractual clause more than anyone on earth wanting to see Dawson against the 40-year old Tarver for a second time.

Dawson, you likely recall, easily outpointed Tarver and knocked him down in the 12th round of their long-awaited fight in October, which drew a paltry crowd at The Palms in Las Vegas and has to be considered a financial flop. But instead of Showtime -- the network that invested so heavily in trying to get the two to fight in the first place -- the rematch will take place on HBO's World Championship Boxing.

There are a few things hard to argue with, the first being Gary Shaw's claim that there just wasn't a big fight on the table for Dawson at the moment. For Tarver, it's the only fight he can take to restore his credibility as a truly top guy at 175 pounds. For Dawson, it's a case of getting this mandatory rematch out of the way and hoping to move on to bigger fights.

Dawson, who won the IBF and IBO light heavyweight titles from Tarver after dropping his WBC strap in order to take the fight, really shouldn't have any trouble with Tarver in the rematch given that he had none in the first fight, that he's younger, stronger, faster, and better, and considering Tarver hasn't beaten anyone of note since topping Glen Johnson and Roy Jones, Jr., in 2005.

To be bluntly honest, it's a crap fight I have little desire to see. Dawson handled Tarver with such ease the first time around, and it's not like Tarver isn't just getting older and slower. I'd have much rather Dawson fought Glen Johnson again, since that one was really competitive and Dawson's toughest test thus far by a mile, but the Tarver rematch was happening unless Tarver didn't want it. And Tarver, of course, does.