Share All sharing options for: Hatton-Pacquiao "close" for May 2 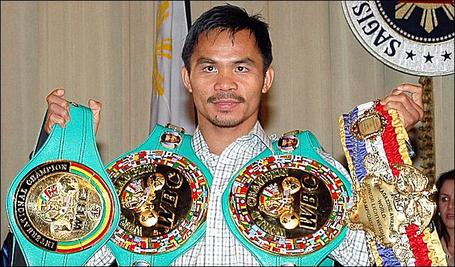 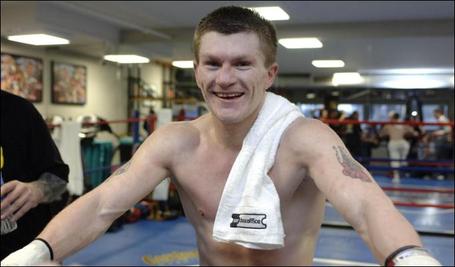 Manny Pacquiao and Ricky Hatton are close to finalizing a deal to meet in a 140-pound (63.5-kilogram) bout on May 2, Golden Boy Promotions CEO Richard Schaefer told The Associated Press on Thursday.

The proposed fight, likely to be held in Las Vegas, would match boxing's unofficial pound-for-pound champion against one of the world's most popular brawlers, assuredly generating huge paydays for both fighters.

"I'm encouraged by the way it's going, and I'm talking to the Hattons (on Friday) again," Schaefer said. "You really have two of the most popular fighters of their generation fighting each other, and that's the kind of fight we want to make."

I wish it wasn't going to end up in Las Vegas, but I always figured that was the most likely destination. The celubtante types and their dates can make the trek that way, and no real boxing fans will be able to get a ticket within reasonable distance of the ring, and promoters just love that for whatever reason. The Hatton legions will snap up some tickets, the Filipino fans can grab a few, and the atmosphere should be electric, not to mention it should be a great fight.

Outside of a Floyd Mayweather return, this is THE fight to make. We all expected it to happen, and it looks like it's an easy go.