Share All sharing options for: Big George calls for Evander to retire 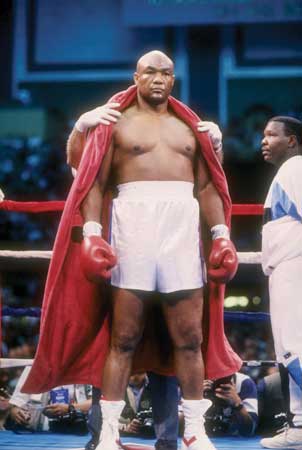 George Foreman says Evander Holyfield is damaging himself and the sport of boxing by continuing to fight.

Holyfield, 46, will eclipse Foreman as the oldest world heavyweight champion if he beats Nikolay Valuev on Saturday. "I hope he'll achieve it and leave boxing alone," Foreman told BBC's World Service. "He's been a terrible reflection on the heavyweight division.

"Win, lose or draw, he should move away from boxing for the sake of leaving a good name for the sport."

"He never was a big, strong man. He's a frail guy and he's getting the worst of it every time he boxes."

Foreman, of course, is right. He goes on to remember his own difficulty leaving the sport, and admits he stayed too long himself, noting, "You fall in love with something that you ought not to fall in love with. It's like falling in love with a bad girl who does not love you, who's done with you and yet you keep hanging on."

Whether or not the grill master has been listening to the Buzzcocks is not for me to decide.

The biggest issue for Holyfield is the health. Well, to him, it's probably finance, and it's so hard to argue with the man doing what he knows in order to get that all settled and in order. He's got kids. He's got bills. He's got that stupid house.

Still, all I can think to do as a fan is argue against him continuing to fight. Maybe he never gets pummeled so badly that anything immediate sets on, but what about the future? He'll have to stop fighting at some point, and there's a whole life after boxing to consider. Does he really want to wind up like Muhammad Ali? Does anyone?

Evander has so much he could give to the sport in a non-fighting role. He could train, perhaps, or he could be used as an adviser, or he could try to go the TV analyst role. He could do a lot. It can't just be about the money, because even though he might not get it all in one burst like he does fighting, there is money he can make in other ways. Sadly, it's like Foreman says -- it's a love affair he can't let go. I'm just hoping he lets go before he has no choice.