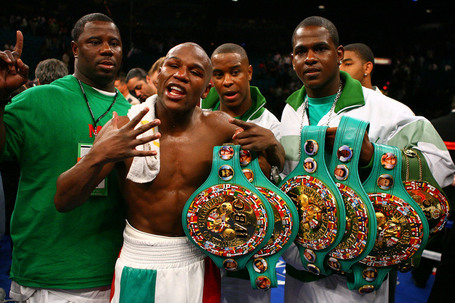 Talk about your hard-hitting journalism. Guys like Lou DiBella, Bernard Hopkins, Ross Greenburg, Bob Arum and Don King all agree that boxing will not die in 2009.

"I'm an eternal optimist. I don't ever count out the sport of boxing. People have been doing it for 100 years," Greenburg said. "The next big superstar in the sport is out there lurking in the shadows. I believe that Manny Pacquiao has launched himself into superstardom. He's shown he doesn't back down from any challenge.

"Then there's a guy in Las Vegas by the name of Floyd Mayweather Jr. If Floyd decides to come back to the sport, it will be an instant jolt of electricity."

This amuses me because it is HBO's Ross Greenburg talking about how the industry (TV-wise) can survive (and profit), and his greatest solution appears to be getting a guy who turns 32 in February and already has an established name to come out of semi-retirement. Way to get creative, Ross.

It's not that he's wrong, but man...isn't the fact that you aren't making any new stars kind of one of the big problems? I'm as all for a Mayweather return as anybody is, particularly if he fights Manny Pacquiao, but that's sort of a no-brainer to help the sport in the short term. I'd prefer something more creative, like, "You know what we need to do? Stop asking people for 60 dollars for three mismatches and a star attraction, or 50 dollars for four mismatches, one of which we try to sell as a competitive fight."

Ross does mention that HBO is investing in Paul Williams, Chris Arreola, Andre Berto, Victor Ortiz and James Kirkland, but it feels like lip service more than anything. He knows he should say it, so he says it. I have no doubt they're firmly behind Ortiz (Golden Boy's Golden Boy) and Berto, at the least, and they should be. Daniel Jacobs is another guy they should try to build a strong base around, plus Alfredo Angulo and Yuriorkis Gamboa and other guys like that. Juan Diaz is still exceptionally young, too. And they're doing that...sort of.

HBO is THE voice in the sport of boxing, at least in America. Showtime is there, and Versus is starting to do more, but realistically neither of them have the budget that HBO Sports does, and that's not their fault. They do what they can. HBO can make the biggest and best fights. HBO can force promoters' hands by turning down stuff like Pavlik-Rubio (although that seems stupid to me) and Cotto-Jennings, which is no less competitive a fight on paper than was the Cotto-Gomez blowout, which HBO happily lapped up because of Gomez's "Contender fame."

Meanwhile, HBO is reportedly nixing support for a fight between WBC super middleweight titlist Carl Froch and mandatory challenger Jermain Taylor. The network prefers a past its expiration date rematch between Taylor and Winky Wright, who fought to a draw in 2006, or a fight between Taylor and Mikkel Kessler, who would probably cost more money than Froch, has about as many American fans as does Froch, and has shown a willingness to burn American networks before.

I think in many ways, we're going to have to prepare for the promoters and the networks to eat a couple of big, blatant slaps in the mouth before anything truly changes. They can talk change all they want, but money makes the sport go 'round, and until they actually start feeling genuine financial heat, they're going to keep doing it the way they've been doing it.