Share All sharing options for: Vitor Belfort newest MMA star to talk about a boxing career 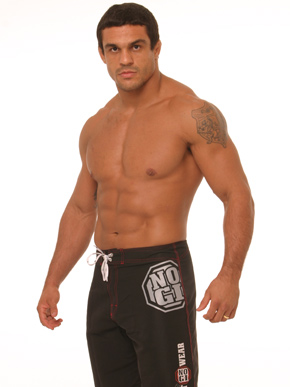 "I want to fight boxing - professional," Belfort said, "I hope Golden Boy can make that happen."

To this point, Belfort has not signed with Golden Boy or any other boxing promotion. He made it clear that this is the first official declaration of his intentions.

"I just made the first announcement today that I am interested," Belfort said, "I am just going see who the person is that I need to negotiate with - now is the time with Golden Boy involved."

Belfort is currently working with MMA promotion/ugly t-shirt line Affliction, the company that has a deal with Golden Boy Promotions. Arlovski also works with Affliction, and has been training with Freddie Roach, who intimated earlier this month that Arlovski has a long way to go as a boxer.

Belfort -- whose career MMA record is 17-8 -- turns 32 in January. His main fighting discipline is Brazilian jiu-jitsu, but he does have a fairly good boxing game for an MMA fighter. And he has fought once officially as a pro boxer, knocking out Brazilian novice Josemario Neves in 2006. Neither has fought in a pro boxing ring since. Currently, he's scheduled to face Matt Lindland in a middleweight (185 lb.) bout at Affliction: Day of Reckoning next month.

How do I think Vitor would do? I'm sure he could drill some cans, but if I've said it once, I've said it a million times: going from one sport to the other is not easy. You train your body to react differently, you train your senses and your instincts to react differently. It's just not the same. I don't think there is a single elite boxer that could step into MMA and not take two or three years of hard training to become an elite fighter in mixed martial arts. And the same is true the other way around. Belfort, Silva, Arlovski -- none of them have more than a puncher's dream against even a mid-tier sort of fighter, and I have my doubts these guys are interested in a couple years of development against bums for little money.

Michael Jordan sucked at baseball, Bo Jackson was way overhyped as a baseball player, Tom Glavine probably couldn't have played pro hockey no matter how many times they say he might've tried to, and I'm willing to bet Wayne Gretzky wouldn't have made it rain from beyond the arc.

Regardless, every time these things come up, I can't help but be somewhat intrigued as a fan of both sports. Would I have paid to see Silva v. Jones? Sure. And eventually, this IS going to happen on a major stage. Maybe not next year, or within five years, but someday.