Share All sharing options for: For Pacquiao, size can't matter 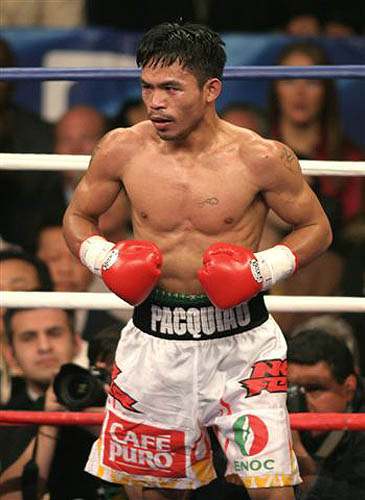 You know all the sayings. Well, they all apply.

If Manny Pacquiao, whose highest-ever fighting weight came in June at 135 pounds, is to defeat Oscar de la Hoya this Saturday, he cannot let the size become an issue.

Some have painted the size as the reason to call this fight a "circus" or a "joke"; others have decided it's a media myth created by those opposed to the fight for whatever reasons they may have.

But facts are facts. Oscar de la Hoya is a bigger man than Manny Pacquiao. He's four inches taller, has a good amount of reach on Pacquiao, and has never weighed less than 130 pounds for any fight, going as high as 160 against Felix Sturm.

Some will point out that Pacquiao was just 17 when he started fighting professionally at 106 pounds. But do you think Oscar was 106 pounds when he was 17? He won a lightweight Gold Medal at the '92 Olympics in Barcelona, when he was 19. So it's doubtful.

The size can matter. It doesn't necessarily have to, and that's probably at the core of a lot of the belief Freddie Roach has in his fighter.

Oscar is a big welterweight, about as big as Antonio Margarito. But he's also 35 years old and really does seem to have trouble "pulling the trigger," as Roach puts it. When holding his own with the faster, more talented Floyd Mayweather, Oscar lost the ability to land an effective jab and lost the fight because of that.

What is Oscar's last truly big win? Vargas? That was over six years ago. Mayorga was a nice comeback win in '06, but we all know the score with Mayorga. The only other wins on his sheet since Vargas are Yori Boy Campas and the debatable middleweight victory against Felix Sturm.

Pacquiao can win this fight, but he's going to have to be at his best defensively. At some point, Oscar will test his chin. And even if he can't knock Manny out, his natural advantages give him the ability to turn this into a toying session if he plays his cards right. He could jab all night. It probably won't back Pacquiao up for long, but it'll win rounds.

How can Pacquiao win? He has to make it about speed. There is no one Oscar could have brought in that truly spars like Pacquiao fights. Manny is a unique boxer. If you watched the most recent "24/7," you saw Bernard Hopkins in Oscar's gym giving his sparring partners advice on how to fight like Pacquiao, and "make Oscar work harder than he wants to work." Though B-Hop meant that to benefit Oscar, he got what Manny needs to do exactly right.

Manny has to move, throw combinations, and light Oscar up with them. I don't think Manny is big enough to be the first guy besides Hopkins to knock Oscar out, but I do think he can discourage him, frustrate him, and make him fight outside of his game. Oscar isn't the quickest guy anymore, his offensive reflexes looked somewhat shot against Steve Forbes in May, and even if he is training to see things before they come, the lightning-fast Pacquiao is going to hit him.

I'm not trying to say that Oscar is slow or flat-footed or anything, but if the Pacquiao camp hasn't watched tape of Roy Jones' win over John Ruiz, then I think they're crazy. Jones was as close to perfect as he needed to be that night. And while these two have an agreed-upon weight limit, Pacquiao will need to be the same. Also in Pacquiao's favor is the fact that Oscar de la Hoya hasn't fought a southpaw since 1997, when he dominated Hector Camacho. Manny can give Oscar a lot of looks he's simply not used to, no matter how smart and savvy Oscar is by now.

This isn't the only way for Manny Pacquiao to win, of course. There are several ways for it to happen. But when I see Pacquiao's hands raised, I see that it came because he was too active, too fast, and too able to box hard for three minutes every round. I see a frustrated and dejected Oscar de la Hoya who has to seriously think about his career. It's not that this is the only outcome I see, either. But if Pacquiao is to win, he has to take the size advantage away. If Oscar's on his game, Pacquiao can't win being tentative.