Share All sharing options for: Holyfield robbed of win over sleepwalking Valuev 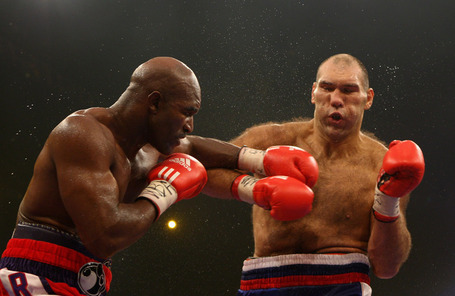 Merry Christmas, Nikolai Valuev. The judges in Switzerland have a gift for you.

If you add up the whole package, including the scoring, it's hard to argue against its place as winner of that award.

I'm trying to come up with the right words, but there really aren't any. Holyfield was robbed of his spot as the oldest man to win a world heavyweight title. By the 11th round, with Holyfield so comfortably ahead in my view, I was thinking of how I was going to compare Holyfield's win over Valuev to 45-year old George Foreman's knockout of Michael Moorer.

I think I would've said something to the effect of Holyfield taking his place in the record books, but not even coming close to replacing the memory of that big right hand that knocked Moorer out years ago.

Now, I'm left trying to discuss -- again -- shameful judging and another pathetic fight by the heavyweights. I'm also left wrestling with my feelings about Evander Holyfield.

In that regard, I can say only this. I am no fan of the old champion and surefire Hall of Famer fighting on at his age. He showed us nothing tonight that would put him in the top 20 at heavyweight, and along with that, I can no longer justify ranking Nikolai Valuev in the top ten, and I don't care what belt he holds.

But as much as I dislike Holyfield fighting on, I like incompetent or biased judging even less. It taints the sport, it makes everyone look bad, and it makes us as fans feel like idiots for bothering to watch. For the record, I scored the fight 117-111 for Holyfield, and I don't think there's any way you could have scored it for Valuev.

This was without question the worst performance of Valuev's career. He sleepwalked through the entire fight, showing zero aggression, had nothing on any of his punches, never came CLOSE to hurting Holyfield, and was outlanded. Holyfield landed all of the best punches in the fight, and that's pretty bad considering Evander mostly circled and rushed and fought in short bursts.

Still, as unattractive and unappealing as that style is, doesn't it beat the hell out of standing in the middle of the ring and looking at the other guy? That's all Valuev did.

This was the worst of boxing. A horrible fight, a laughable "champion," a bad challenger, atrocious judging, and you know what else? They sold out the building, and everyone made their money.

They robbed Evander Holyfield of a win. Not a win that meant much to his legacy in realistic terms, and not a win that was going to propel him back into the elite ranks of the sport. Not a pretty win. Not a good win. But a win. He trained, he worked hard, he showed up in shape, he did what he could do given the circumstances, and the other guy stood there and watched him do it. And they robbed the poor bastard.

What a sorry day for the sport of boxing.

Steve Cofield of Yahoo! Sports had it 116-112 for Holyfield

BoxingScene.com also calls it a robbery