Share All sharing options for: Ring decides not to put welterweight championship on the line for Margarito and Mosley 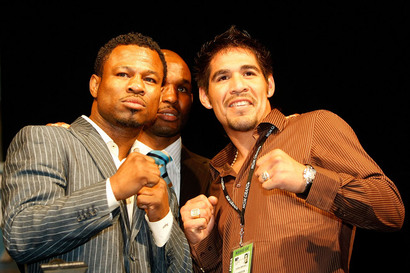 The Ring has decided against putting the vacant world welterweight championship on the line for the January 24 fight between WBA titlist Antonio Margarito and Shane Mosley, the magazine's No. 1 and No. 3 ranked fighters.

According to The Ring's rules:

Currently, Miguel Cotto is ranked No. 2. The championship was vacated by Floyd Mayweather, Jr., when he declared himself to be retired. Mayweather had beaten Carlos Baldomir, who had beaten Zab Judah.

I think The Ring should re-evaluate these things. When folks talk about the confusion of having so many "champions" in the sport, I like to tell them that The Ring's titles are all you need to pay attention to. I'm a firm believer that their champions are the only true champions, even in controversial circumstances like we had after Joel Casamayor retained the lightweight strap with a joke decision against Jose Armando Santa Cruz.

I've said before I think the magazine should open it up for No. 1 to face anyone in the top five for the vacant championship -- why not? I suppose you can argue that it cheapens the value of the championship, but if there is no championship, what's the value, anyway?

After all, the championships are up for grabs when a champion fights anyone -- Santa Cruz was a challenger for Casamayor, and Marco Antonio Rubio will be challenging middleweight champ Kelly Pavlik in February. If Rubio upsets Pavlik, he's THE middleweight champion. He's ranked #8 contender by the magazine.

Nothing will change -- as is the story of everything in boxing, it seems -- but it's food for thought. If the folks at The Ring really want to make their championships important, it'd be nice to have, y'know, champions.