For Oscar, there's little to gain, and everything to lose

Share All sharing options for: For Oscar, there's little to gain, and everything to lose 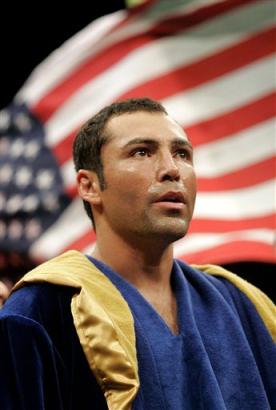 For Oscar de la Hoya, a reputation hangs in the balance on Saturday.

Those that question his credentials ignore that his losses -- five in 44 fights -- have come to elites of the sport. Only Bernard Hopkins has ever knocked him out, and the only others to hold wins over "The Golden Boy" are Floyd Mayweather, Tito Trinidad and Shane Mosley.

He has held world titles in six weight classes, from junior lightweight all the way up to middleweight. He may not be a truly sensational all-time great talent, but his prime years were not far off from that, either. He is, though, a once in a generation draw for the sport. For all of Oscar's faults, boxing would be in truly dire straits without his presence the last 16 years.

He is, arguably, the last American Olympic boxer to truly captivate the imagination of the sport's fans. And he's the biggest non-heavyweight attraction ever.

If he loses to Manny Pacquiao on Saturday night in Las Vegas, a naturally much smaller man, his legacy will take a serious hit. At 35, he's aged, but he's not washed-up. And if he beats Pacquiao? The minds of many will simply respond, "So what?"

In many ways, Oscar is in a no-win situation against Pacquiao. If he wins, he should have, as the bigger man. If he loses, then how'd he lose to such a naturally, physically overmatched man?

There are more wrinkles than that, of course. Small or not, Pacquiao is a dynamic fighter, and the sport's best pound-for-pound. He has talent and ferocity, and mixes them unlike anyone else in boxing today. If you take the size out of it, there's nothing wrong with Pacquiao stepping up to take this challenge, and there's nothing wrong with Oscar fighting a man that above anyone else, deserves the huge payday that comes with fighting boxing's -- and only real -- drawing card.

There are a lot of ways for Oscar to beat Manny. He could jab, use his size, and keep Manny on the outside, waiting for chances at big power shots. Pacquiao has a habit of leaving himself open, even now that he's become a much better defensive fighter than he was just a few years ago, when he was emerging as such an action star.

Oscar says it would be "a disaster" if he doesn't knock out the Filipino legend. I wouldn't have classed it that way, but now that he has, it's hard not to think that way going in. If Oscar wins a close decision, how many people are going to think he's just plain past it? If he can't win a shootout -- which is what fans want from Pacquiao fights -- who will really want to see him fight on against Ricky Hatton, or in an undesired rematch with Mayweather?

De la Hoya painted himself into the corner of needing to knock out Pacquiao, perhaps, but it's a worthwhile corner to be in, too. Oscar will do himself and the sport a favor by going out and fighting toe-to-toe with Manny. Given his size, he should have the confidence that he wins the war. If the two go balls to the wall, they will at least entertain.

And with the amount of boxing fan backlash against this matchup since the moment it was signed, that might be the very best they can do in the long term. A win for Oscar will never sit well with a lot of people, but it's not like the guy should go out there and do anything less than try to win. Let the haters hate. Fight on.