Barrera and Hatton weigh in on de la Hoya-Pacquiao

Share All sharing options for: Barrera and Hatton weigh in on de la Hoya-Pacquiao 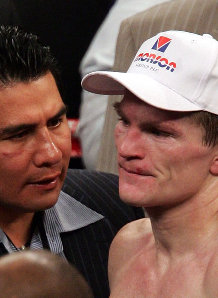 Barrera joined the legion of fighters and promoters calling the fight "a farce," and laying into it pretty heavily. Others to slam the fight have been Antonio Margarito, Miguel Cotto and WBC President Jose Sulaiman.

Said Barrera, "What battle? This is not battle. ... The fight is a circus."

This coming from the legend that came back in Chengdu recently to fight Sammy Ventura, over a year after an iffy at best performance in a rematch with Pacquiao. You may recall Barrera fighting merely to survive in that bout, and taking a blatant cheapshot at Pacquiao late in the fight. But to each their own. Marco's a legend and can say what he wants, really. He's also hardly alone.

Still, I think the whole thing smacks of jealousy from so many of these guys. Jealousy that Pacquiao will make by far a career-best payday. Anger from Sulaiman that Pacquiao sits indifferent to his standing as the WBC's lightweight titlist, and won't be paying any sanctioning fees for this bout. In fact, neither man will. Top Rank, Golden Boy, HBO and the fighters are keeping it all. Ha!

Hatton, meanwhile, is for the fight, and is rooting for a Pacquiao win, hoping to take on the man regarded as the sport's pound-for-pound best to lift his crown. He also notes that he feels he has nice negotiating status for a fight with either of the two combatants. Ricky remarked, "I like to think that I'm in a position where I can say to Manny or Oscar, if terms aren't right, I'll f--- off home and fight in front of 100,000."