Share All sharing options for: Dana White speaks on Oscar de la Hoya as a promoter 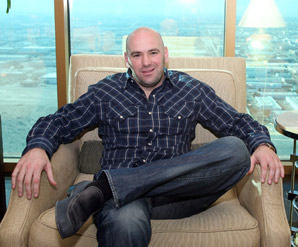 From the Long Beach Press-Telegram (hat tip to our friends at Bloody Elbow):

"I used (boxing) as the blueprint of what not to do. Boxing doesn't do what I would do if I was running one of these cards...When De La Hoya and Mayweather had their pay-per-view with over 1 million buys, he could have stacked that card with all the talent Golden Boy has. You know why he didn't? He didn't want to give up the money. Nobody in boxing is willing to invest money back into boxing's future. We do in the UFC. The money that we make we invest back into the business. We use it to help the grow the sport. Nobody in boxing is willing to do that. And because of that, in my opinion, they have no reason to sit around and (cry) their sport is dying. A lot of people love that De La Hoya is a fighter and the promoter but thing is, it leaves you short-sighted. And he only cares about himself. He knows he gets the pay-per-views when he fights but he doesn't stack the card with fights that will build future fights. You have to invest in a company and De La Hoya is not willing to do that."

We all know the financial reasons that boxing cards don't get loaded up anymore, but White is right that more could be done. You can't really go bananas about it the way UFC can -- top boxers are paid more money per fight than top MMA guys are on average, and it's not chicken scratch for difference, either.

Still, White's a proven businessman, and a promoter in combat sports. He speaks with some real knowledge. There's something to it, even if it's not quite as simple as he wants us to believe.