Analyzing the Oscar-Manny undercard: Bang for your buck?

Share All sharing options for: Analyzing the Oscar-Manny undercard: Bang for your buck? 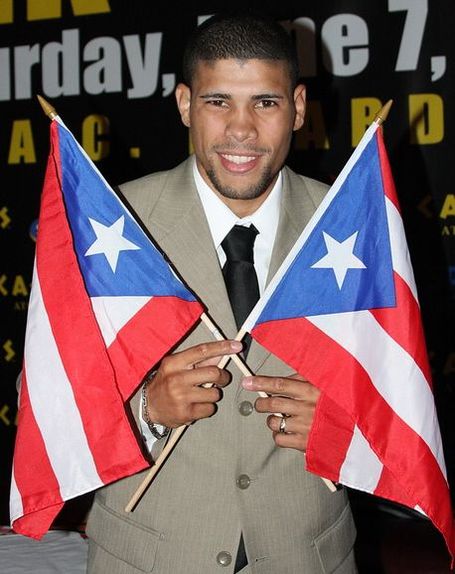 But this Saturday night's pay-per-view event pitting the two in a "Dream Match" main event is going to drain your wallet to the ca-ching-ching tune of $54.99. So what's on the undercard? Is there anything worth seeing?

That all depends on what you like. But rest assured, there will be action, there will be knockouts, and you'll get to see three of the fastest-rising stars in the sport in action at the MGM Grand.

Heading up the undercard action is 122-pound titleholder Juan Manuel Lopez, Puerto Rico's newest superstar export into the sweet science. Lopez's wicked power (21 knockouts in 23 fights, all wins) was on full display when he took the WBO junior featherweight title from Daniel Ponce de Leon in June, knocking the Mexican slugger out in just over two minutes. It was supposed to be the fight of the night -- instead, it was just a huge coming out party for the 25-year old Lopez. In October, Lopez made his first defense, knocking out Cesar Figueroa in 47 seconds.

He'll be opposed on Saturday by Sergio Medina (33-1, 18 KO), a 26-year old Argentinian whose only career loss came on the Oscar-Mayweather undercard in 2007, when he was beaten by Rey Bautista. He's fought five times since, all in his home country and mostly against illegitimate competition. Medina will be able to prove whether he's a contender or not on Saturday.

21-year old junior welterweight "Vicious" Victor Ortiz (21-1-1, 17 KO) may now be best known as the young man that was reported to have "beaten up" Oscar de la Hoya -- his boss, mind you -- in training camp for the big fight. His record is blemished only due to a DQ early in his career, and a technical draw after one round against Marvin Cordova, Jr., in 2007. Otherwise, he's been everything his nickname implies. He's spent his last four fights pummeling veterans like Carlos Maussa, Roberto Arrieta, Emmanuel Clottey and Dairo Esalas.

On Saturday night, he'll take on 31-year old Jeff Resto, who was recently the feature of a great story by Mitch Abramson at ESPN.com. In his younger days, Resto was one of the hottest properties in the sport. Now 31, it would be a vast understatement to say his career didn't progress as planned. In '03 and '04, he lost back-to-back fights against Maussa and Michael Warrick, and this fight with Ortiz is a chance to step back into the spotlight. All accounts right now of Resto are pretty much the same: no one's quite sure where he is mentally, physically, or competitively. He may provide Ortiz some real resistance. He very well may not. He's a wild card.

The opening bout will showcase one of the sport's hottest prospects, as Daniel Jacobs will appear on his fifth straight major card. On September 13, he was off TV on the Casamayor-Marquez undercard. 14 days later, he fought under Mosley-Mayorga, again untelevised. On October 18, he kicked off the Pavlik-Hopkins pay-per-view broadcast with a first round knockout of Tyrone Watson. And on November 8, he was again off TV at Madison Square Garden, beneath Calzaghe-Jones.

Jacobs, 21, is really making the rounds. He'll face Victor Lares, a 31-year old club fighter from Corpus Christi, Texas, in a fight that honestly has no business on pay-per-view in today's age. Lares has no power (14-3, 3 KO), no shot at winning, and no name. Jacobs could have just as easily fought off TV again. I get the idea to try and expose him to a big audience, but no one's going to take this fight very seriously. Golden Boy and Top Rank could've made any number of more interesting fights for an opener, but they chose to pass on that option. As we're all too well aware, it happens.

Now as far as 2008 pay-per-view undercards go, this one is pretty much par for the course. It features some good young talent, but on paper they're all in fights meant more to present them than push them competitively. Medina has a pretty record, but it's a paper record. Resto is a mystery. And Lares is a tomato can.

Maybe the best thing you can say is that without some horrible misfortune, it won't be able the touch the overpowering stink that was the Calzaghe-Jones undercard in November, and it should feature some good action. There's a decent chance all three fights are very short, too, which could lead to some interesting production choices as we wait around for the main event. How many times can one interview Buboy?

The answer: Not enough.