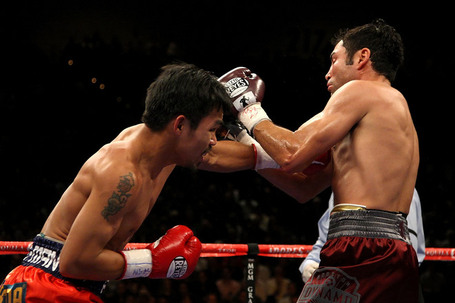 And after eight one-sided rounds, Oscar de la Hoya quit on his stool, advised by trainer Nacho Beristain and warned by referee Tony Weeks that the end was near.

His punches landed at will. He pinned the taller man against the ropes repeatedly and battered him mercilessly. And Oscar de la Hoya, at 35, had zero answers for the hurricane that is Manny Pacquiao. Absolutely none at all.

Let me tell you something. I like Ricky Hatton. When Manny Pacquiao and Ricky Hatton lock up in 2009 -- and they are going to, we all know that's next -- Manny Pacquiao right now should be favored to flatten Hatton. On paper, that fight is no longer even close, if you ask me.

But then again, how much of this is pro-Pacquiao, and how much of the result of this fight should be considered anti-Oscar? Oscar was terrible tonight. It was without any question the worst performance of Oscar's wonderful, Hall of Fame career.

"My heart still wants to fight, that's for sure, but when your physical doesn't respond, what can you do?"

We'll have more tomorrow evening. For now, all Pacquiao fans revel in the victory. My head picked Oscar; my head was way wrong. My heart was with Manny, the man who could come out of this fight and keep helping boxing for years and years.