The Bad Left Hook 2008 Fighter of the Year: Manny Pacquiao

Share All sharing options for: The Bad Left Hook 2008 Fighter of the Year: Manny Pacquiao 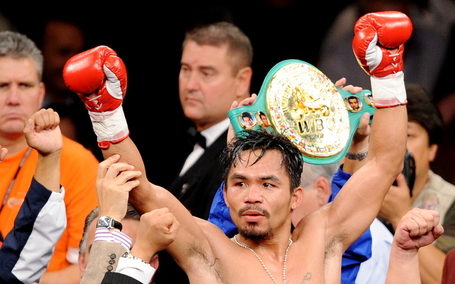 The race is over. If any Fighter of the Year award for 2008 goes to any fighter besides Manny Pacquiao, it's bogus. Let's recap Pacquiao's incredible 2008:

The most likely fight now for Pacquiao is a shot at Ricky Hatton and the junior welterweight championship of the world, a fight that will do bonzo business the world over. I figure it'll land in Vegas, even though they could do a huge gate somewhere in England, maybe even Wembley Stadium.
But don't yet count out ol' Money Mayweather smelling the allure of the cash register. I think it's more likely for late 2009, if ever, but you never know.
One thing is for certain: Manny Pacquiao is the best boxer in the world, and nobody has a case against him as the Fighter of the Year. End of story.