Oscar out of the hospital, likely to retire

Share All sharing options for: Oscar out of the hospital, likely to retire 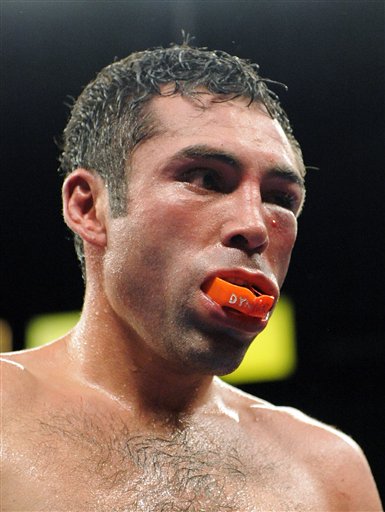 Oscar de la Hoya headed to the hospital after his loss to Manny Pacquiao mostly as a precautionary measure, and is now out with no broken bones and ready to head home to Puerto Rico. He's also likely to retire:

"No one can make that decision for him," said Richard Schaefer, the chief executive of de la Hoya’s Golden Boy Promotions. "We’ve laid the foundation for this time. Oscar has entertained millions of boxing fans over the years, and we always knew there’d be a time where he’d take that success and move into a different part of the sport."

That time clearly appeared to arrive on Saturday night, when Manny Pacquiao shredded de la Hoya with quick punches and footwork, battering the proud 10-time former world champion before a capacity crowd of more than 15,000 at MGM Grand in Las Vegas and a pay-per-view audience expected to surpass one million.

Schaefer was sitting near ringside. He watched in concern as Pacquiao so overwhelmed de la Hoya in the seventh that judges awarded him a 10-8 round without a knockdown. Schaefer said after the eighth, he grabbed a giveaway towel from his seat and approached the corner to get the attention of de la Hoya trainer Nacho Beristain. Schaefer said de la Hoya’s wife, Millie, was nearby, upset at her husband’s battering.

"What’s the point?" Schaefer said he shouted at Beristain.

I do hope Oscar is content with the idea of saying that enough's enough as a fighter. He still has plenty to give back to the sport as a full-time promoter, one that I think we can sort of rely on to give us good fights because he may care more than your average promoter about seeing good fights, having been a fighter himself. The article linked also mentions that Schaefer is already looking into Pacquiao-Hatton, and Bob Arum has said that Hatton is definitely their No. 1 choice.