Share All sharing options for: Holt to face Demetrius Hopkins on Saturday 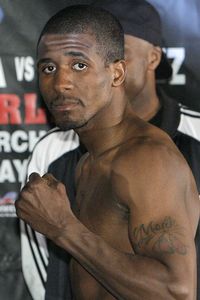 The Ring is reporting that Kendall Holt will face Demetrius Hopkins on Saturday, saving Showtime's card after Ricardo Torres pulled out of a rubber match with Holt. Most of us last saw Hopkins on the Barrera-Marquez undercard, getting a really wide decision win over Steve Forbes that I think most of us believe Forbes deserved to win.

He's fought just twice since then, in July and November of 2007, off TV, and has had promotional squabbles that saw him leave Golden Boy and on and on and on. He hasn't fought in over a year, and is lucky to be in this new position. Or cursed, I guess.

Hopkins has not been very active. He last fought in November 17, 2007, when he scored a 10-round decision over Enrique Colin in Atlantic City. Hopkins (28-0-1, 11 KOs) had been off because of contract squabbles.

"We were training for an undercard fight against Germaine Sanders," said Ennis, who’s been training Hopkins since 2001. "We took the fight. We were training to fight at 145 pounds, so we only have a few more pounds to go. Germaine Sanders is a pretty crafty boxer, and Kendall is the same kind of fighter, with more boxing. We’re looking to win. This is a big opportunity for Demetrius. We can shut a lot of people up.

I'm not going to say I'm a D-Hop fan or that this is really a suitable replacement for Torres in a pure "Torres v. Hopkins for entertainment value" sense. But they didn't really have many options, probably. Holt's a good fighter that most guys aren't going to want to fight on a week's notice.

The trouble for Holt could be that he prepared for Torres, a thunderous puncher, and now he'll be meeting Hopkins, a semi-slickster. Still, he's going to be facing a rusty Hopkins that might find himself having to cut weight really fast. Five pounds is a big difference for a week.