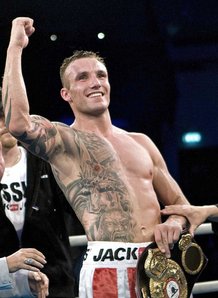 With Calzaghe having stepped down from his perch atop the super middleweight division to rule at light heavyweight, Kessler has taken over the spot as the world's best 168-pound fighter until someone other than Calzaghe can beat him.

The problem with finding someone to prove otherwise lies with Kessler's management, who left Showtime hanging earlier this year and dropped out of an advertised fight with Edison Miranda, a fight their guy would have been favored to win. Showtime found a suitable replacement in Arthur Abraham (who creamed Miranda), and all turned out OK, but it was still a crappy move.

It's not reason to discount Kessler's ability, though. He's an excellent fighter that gave Joe Calzaghe as much of a test as anyone has, he's got real power, he's athletic, and he's well-rounded. His last two fights have been fine rebounds from the Calzaghe loss, but now it's really time for Kessler to step it up and fight like he's the division's best, because that's exactly what he is. There are worthy challenges out there.

Whether or not referee Marlon B. Wright's strange display that may or may not have saved Bute from a 12th round knockout loss against Librado Andrade is still sticking in your craw, it's impossible to deny that Bute had his way with Andrade for almost all of the 11 rounds prior to the final frame. Andrade is indestructible, seemingly, but Bute did hurt him a few times, and he outclassed him in terms of boxing.

Bute got to show on a large scale, with American TV, that he's a good fighter, no regional guy that can't hack it when the competition goes up, and also that he's not infallible. When Andrade jumped on him in the 12th round, Bute was in serious trouble, wobbling around the ring, being held up by the ropes, and fleeing for his life. He was glassy-eyed even when he got up from the official knockdown.

Bute-Andrade II would be welcome, but at the same time, chances are Bute outclasses him and never lets that big jump come. He can learn from the mistakes he made that emptied his gas tank by the later rounds.

JT's official super middle debut was an easy defeat of ex-roommate Jeff Lacy, expected by those of us that had lost all hope of Lacy ever rebounding from the Calzaghe loss and the rough couple years that have followed. Lacy did push Taylor to be his best, though, by throwing power shots. At one point, he should have scored a knockdown of Taylor on a glancing blow, but it wouldn't have really mattered anyway. Taylor won by such a margin that that swing in points wouldn't have changed anything.

The question now is where the 30-year old Taylor goes next. He is the mandatory for new WBC titlist Carl Froch, and Froch wants to fight in April. Lou DiBella and Taylor have both talked about light heavyweight champion Joe Calzaghe, which I have to say I think is a terrible idea for Taylor, whose athletic gifts would be neutralized by Calzaghe. And Taylor has never been at his best against crafty southpaws (his draw with Winky Wright, his mind-numbingly boring win over Cory Spinks). Add in the fact that Calzaghe punches a lot more than those two guys, and I just think it spells disaster for Taylor. Disaster and a nice payday, but if he gets washed out by Joe C, options become limited for a while.

The Froch fight, or a shot at either Kessler or Bute, would do fine. Taylor has the tools to rule this division.

Froch had always been regarded as lumbering and slow when discussing his faults, but he looked very sharp in his WBC title-winning effort against the fast, athletically-gifted Jean Pascal on Saturday, which was easily the best fight of the month and one of the year's best, too. It was a hell of a good fight, competitive all the way and uninterrupted action.

Pascal acquitted himself nicely in the fight, as his style has certainly drawn its own detractors. He was better than ever. Still, Froch rightly won the fight, was exciting in doing so, and showed he can fight in a style that could still make him quite a big English star for the next few years. At 31, he's no spring chicken, and he wants the big fights now. He's called out Calzaghe on numerous occasions, but is still a longshot to actually get to fight him. He says he'll gladly fight Taylor, who will no doubt want the bout in the States despite the fact that it would do better business overseas and Froch is the one with the title.

It's too bad the Froch-Inkin fight that was scheduled for this past spring never came off, but now both remain undefeated and are two of the four major titlists in the division. Inkin's win over Zuniga made me think he'd have beaten Froch; Froch's performance against Pascal makes me less sure. Like Froch, Inkin isn't exactly young, at 30. In fact, the two youngest guys we've mentioned so far are Kessler (29) and Bute (28). They're all still in their primes and have years ahead of them, and really these five guys could be the top five in the division for a good little bit.

Inkin is the only titlist that has a fight scheduled right now, as he'll be taking on unbeaten Hungarian Karoly Balzsay (19-0, 14 KO) on January 10 in Germany, where both fighters are based. Balzsay competed for Hungary in the 2000 and 2004 Olympic Games, and also won a silver medal at the 2002 European Amateurs.

I's easy to get caught up in the idea of Bika as a firm challenge for any of the titleholders, which he is. In fact, the only guy I'd give him little shot against is Kessler. We've now seen aggression and power hurt Bute, and Froch and Inkin are on about the same level as Bika, who still fights at times like one of those 20-year old phenoms that's just leveling guys that don't have his natural skill.

The Manfredo win, though, is not much to really get excited about. Manfredo is a club fighter with slow hands, little power, and a ridiculous notion that he should mix it up with guys like Bika instead of trying to break them down a little here and there and win some rounds. And what else are we really talking about with Bika's record? He gave Calzaghe a test, true, but Bute dominated him when they fought in '07, and his best wins are Manfredo, Soliman and Codrington.

The sides have had light talks about matching Bika with Librado Andrade, which would be a war. Speaking of...

Andrade lost every round to Mikkel Kessler and lost almost every round to Lucian Bute, but he's dangerous every time out. He'll never beat a guy like Kessler, and he has only a puncher's chance against truly top-flight fighters. But he's so impossible to really hurt, it seems, that you cannot try to knock him out. His competitive, highly entertaining March stoppage of Robert Stieglitz was a really nice win. Stieglitz is a good fighter and tried to trade with Andrade. That's why he lost. Yusaf Mack tried to blow Andrade up in a war, and all but collapsed in the process. Lucian Bute was sent reeling.

It's hard for anyone that can't truly overwhelm him with combinations and good defense to really fight aggressively on Andrade. Kessler did it to some degree because Kessler is a different class of fighter than Librado. But most guys are going to find themselves gut-checked against this dude in some way. There's not a fight featuring Andrade that could be a bad one, really.

The shine is well worn off, but for now I'll stick with Miranda as a viable threat to most in this division. We've seen how to beat him. You push him around, hit him, and like most bullies, he cracks. Arthur Abraham and Kelly Pavlik weren't afraid of Miranda, so they whipped his ass. You're also talking about the two best middleweights in the world, and the only two guys to ever beat Edison.

Still, Miranda is a destructive puncher and against most guys, that will be good enough.

One of the division's most intriguing fighters right now is Dirrell, the 26-year old who is starting to really blossom. He made Victor Oganov look like a genuine bum, and he wasted Anthony Hanshaw, too, another credible fighter. There's still a bit to do, and he hasn't yet stepped up in competition to the best out there, but when he does, I have no doubt he'll succeed. His 2007 stinker against Curtis Stevens is a fading memory.

Despite some bizarre career choices, I still want to like Green because I like watching him fight. 2008 was a wasted year for him and he needs to start going at this thing seriously if he wants to hold on to whatever spot he still has in the division, but I don't count him out, particularly if he stops looking at his feet all the time.

You Coulda Been a Contender...

Even though he's still 24-2, 31-year old Jeff Lacy may have some serious thinking to do about his career. ... KO or get KO'd artiste Alejandro Berrio is still out there, banging away. ... A win over Inkin would absolutely put the aforementioned Karoly Balzsay in the top ten. ... Jean Pascal fought well in his first career loss, and now it'll be interesting to see how he comes back. ... Did you know Andre Ward is still considering boxing his career? Few well-hyped prospects have ever progressed this slowly. He'll be back in action on 12/13.