Share All sharing options for: Manny's Future: Hatton, Mayweather, Mosley, but not Margarito 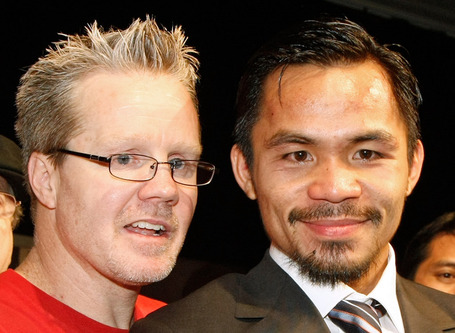 While it looks like a certain lock that Manny Pacquiao will, as expected, fight Ricky Hatton next (likely in May or June), the Pacquiao team is throwing around some other names, too. One, though, is being counted out, and wisely so.

"We’re not going to fight Margarito,’’ Roach said flatly when his name was brought up. "We would fight Mosley if he beats Margarito but I know our limitations. There are a lot of fights for Manny at 140 but a young Margarito? No.’’

There have already been some rumblings that former pound-for-pound champion Floyd Mayweather, Jr. may be back in boxing next year and he is someone Pacquiao might consider even though Mayweather would be considered the best fighter in boxing if he was active at the moment.

The former welterweight champion retired after winning a far more difficult split decision against De La Hoya a year ago so one could easily see a showdown with Pacquiao transformed into a major pay-per-view attraction.

Roach and Pacquiao would have no problem with that. Their only problem would be at what weight the two men would fight.

All of these are interesting ideas. Pacquiao-Hatton is the biggest fight to make right now, assuming Mayweather isn't going to come right out and take a challenge from Manny, which I don't think anyone expects he will. If Shane were to beat Margarito, Pacquiao-Mosley could be a hoot. Shane loves to slug it out.

And it amazes me that I'm talking about Pacquiao-Mosley without any trace of fantastical dreamery.