Share All sharing options for: Lennox Lewis leads the 2009 Hall of Fame class 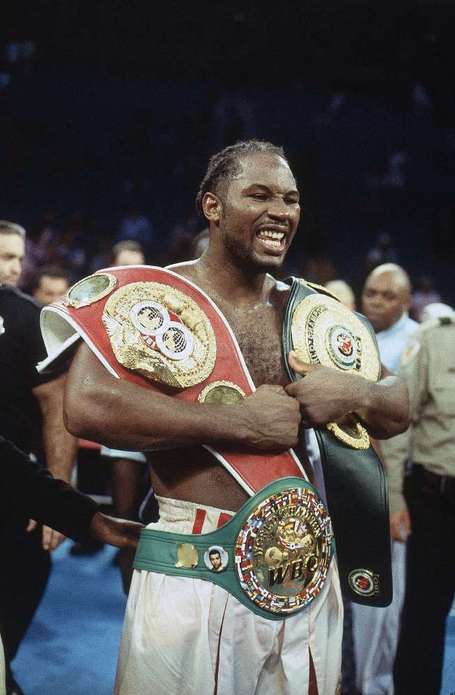 Former world heavyweight champion Lennox Lewis -- the last real world heavyweight champion -- heads up the 2009 Hall of Fame class, elected on his very first year of eligibility. Lewis retired in 2003 with a record of 41-2-1, with 31 knockouts. He beat every man he ever stepped into the ring against, avenging losses against Hasim Rahman and Oliver McCall. He also beat Evander Holyfield in the rematch of their shameful draw, a fight Lewis clearly deserved to win anyway.

Others elected into the Hall from the modern era are Texan bantamweight star Orlando Canizales and Brian Mitchell, the first South African to be enshrined in Canastota. Both Canizales and Mitchell are heartily deserving of the honor, just as Lewis is.

But let's really talk about Lennox. Most of the time here, when we talk about Lennox, it's because he's such a terrible analyst on HBO. But Lennox was a class act fighter and a great one to boot. There is the stigma attached to basically all modern fighters that nobody's ever as good as they were in the old days; this happens in every other sport, and I hope my generation will be the one to admit someday when there are new stars in sports that maybe these guys could have played in any era, though that's unlikely.

Lennox was never the big, huge superstar guy. He wasn't always the most exciting fighter, though he had real power and at 6'5" with that power could go toe-to-toe with anyone in boxing history, and I mean that. It's also hard to compare the different eras because of the natural size advantages modern guys have. Joe Louis was 6'2", but was in modern terms a cruiserweight. Same with Rocky Marciano, who at 5'10" and usually around 185 pounds would probably be cutting 10 pounds to get down to light heavyweight if he fought now, and even then he'd be short a lot of fights. Antonio Margarito is 5'11", you know?

You can normalize things to some degree, though, and I don't think it takes much math or science, it just takes common sense. If you don't normalize, guys like Wladimir Klitschko, even, with his size, power, and technical prowess -- they're going to beat the crap out Marciano or Louis, but of course there's not anyone with a brain that would rank Wlad as an all-time heavy over either man.

I don't usually like to get into these things, either, because they tend to spark weird debate where I don't think anyone can prove anything. But since it's a Hall of Fame thing, why not?

Anyway, where would you rank Lewis all-time as a heavyweight?

For the modern fighters, 1980s and forward, I'd put him either No. 1 or No. 2, behind perhaps only Holyfield, with Holmes third if you consider that the same era (it's close enough, I think, as Larry was the bridge between generations), all a mile ahead of Mike Tyson, who will be up for induction in two years (Mike's a story for another time).