Shane Mosley and James Toney weigh in on Oscar

Share All sharing options for: Shane Mosley and James Toney weigh in on Oscar 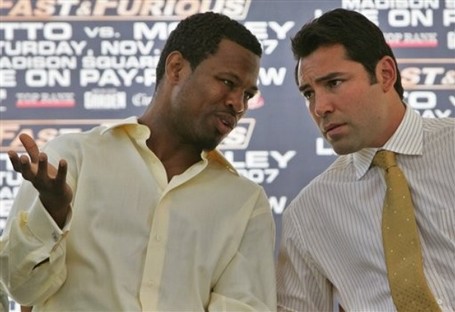 "That wasn't age, it was something he did in training," Mosley said. "He could only gain two pounds after the weigh-in. He couldn't get his stuff back. ... He was just weak. There's a difference between being slow and being weak. He was a sitting duck. I think it was more about how he prepared. He knows what went wrong."

I do think there's something to this, though I'm still of the opinion that Oscar should hang it up as there is seriously no fight I can think of that I want to see him in. It's not like I'm dying to see Oscar take on Vernon Forrest, and I don't think anyone but Vernon Forrest would be either. Oscar-Sergio Mora in a battle of L.A.? Please.

Still, I think the weight absolutely did play a serious role. I was concerned about him weighing 145 on the scales, and putting on two pounds overnight? Very odd. You could argue he overtrained. You could argue that he just shouldn't be trying to get himself down to 147 anymore, period. And you can also argue that he really is just shot, can't pull the trigger anymore, and doesn't have it.

Former multi-division world champion James Toney, 40, who is completing preparations for his Saturday heavyweight fight against Fres Oquendo at Morongo Casino in Cabazon, said De La Hoya must come back and fight. Toney, by the way, has been in more than 80 pro fights.

"Oscar's a good fighter, but he's fought too many times to be fighting a guy like Manny Pacquiao," Toney said. "Ending it like he did, sitting on the stool, he better come back and redeem himself. He looked like a little sissy. I've been beat up. I never quit.

"The Mexican fans who haven't liked him should love him now because he did what their favorite Roberto Duran did 26 years ago: 'No mas.' Oscar can't do that, or he's going to go down as a quitter."

I know Duran's father was Mexican, but he was born in Panama, his mother is Panamanian, and he fought out of Panama his entire career. Duran did fight once in Mexico, in 1971.

It was also 28 years ago that the famous "No mas" fight happened. So this is James Toney talking out of his you know what and where. I hope he passes his post-fight drug test this time.