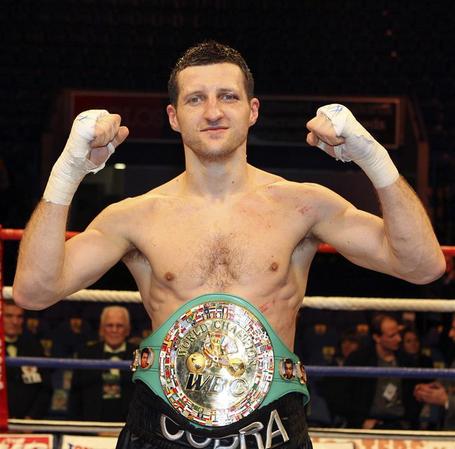 Even though newly-crowned WBC super middleweight titleholder Carl Froch's promoter, Mick Hennessy, says that Jermain Taylor is trying to avoid his fighter and make a scrap with IBF titlist Lucian Bute, that doesn't appear to be the case. Lou DiBella, Taylor's promoter, says Taylor told him to make the fight with Froch:

"We are absolutely interested in fighting Carl Froch. If Froch is willing to come to North America, we are willing to make the fight. After watching Froch's fight with Pascal, I will no longer say, 'Who the Froch is Froch?' I saw who he is and he's a pretty damn good fighter. I think him and Jermain would make for a very good fight. Jermain told me that he wants the WBC title."

I totally understand why Taylor and DiBella want to do the fight in the States, what with the lingering idea that "going on the road" will still lead to screwjob judging and home cooking. But still, Froch is the guy with the title and the guy who can draw the bigger crowd on his turf. I hope some of this stuff goes away sometime.

I figure chances are this thing'll go to a purse bid and DiBella will put in a big bid to win the rights. I do hope the fight comes off -- now that they've both talked it up and after watching Froch's cracking win over Jean Pascal, I'm very interested in seeing it. Froch can go, and Taylor has bent to the will of aggressive fighters recently. Still, Taylor has the better natural athletic gifts and faster hands.

It's a good fight. It's a really interesting fight. And Froch has earned this big one.