Share All sharing options for: Arum says Cotto could return on Feb. 14 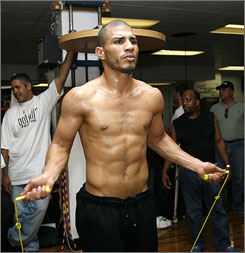 Bob Arum is blaming Miguel Cotto's July loss to Antonio Margarito on a "lack of communication" between Cotto and his uncle-trainer, Evangelista, and says that the Puerto Rican superstar could be back in the ring attempting to rebound from his first pro loss on February 14, 2009, Valentine's Day.

Arum says the potential February fight could take place in Puerto Rico depending on the potential for business (which I assume would be great) and what kind of aid the Puerto Rican government supplies, or failing that, Cotto would return to Atlantic City, where he has become a post-Gatti world favorite of the rabid, excellent Jersey boxing crowd.

The plan still appears to be Cotto and Margarito both fighting in the first quarter of the new year, though they may not do that two-city, double-header on HBO that was previously planned. If both should win, a June rematch is likely, as it probably makes the most economic sense for everyone involved sans one of the two men fighting Oscar de la Hoya or Floyd Mayweather, Jr.

Arum says that he would not rule out welterweight titlists Joshua Clottey or Andre Berto as potential opponents for Cotto's return.

As a pro, Cotto has never taken a break as long as the one he'll be on by the next time he climbs into the ring to fight, so I think it'll be interesting to see how that affects him, which shouldn't be a big deal but might reveal a little something about him.