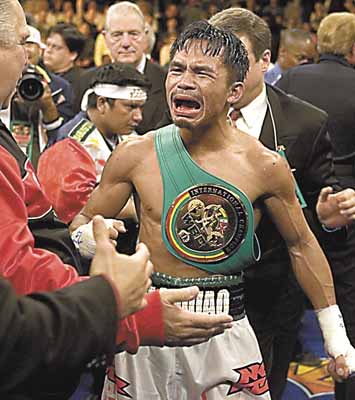 "Are you kidding?" you may ask.

Congressman Rufus Rodriguez of the Games and Amusement Board in Pacquiao's home country has pleaded with the lawmakers in his country to freeze Pacquiao's boxing license, preventing him from taking part in his December 6 showdown with Oscar de la Hoya.

Rodriguez said that Oscar "will kill the smaller and lighter Manny," and that "We have to protect him. He is a national treasure."

This is some s**t that I can't even fathom taking place in this country, to be honest with you.

Yes, there's a size differential, and I think it's substantial enough that Oscar should be considered a heavy favorite. But to try to "save" Manny from Oscar? Come on.

Spokeswoman Lorelei Fajardo sent out a message for the Filipino President, Gloria Arroyo, urging lawmakers to leave the decision to Pacquiao, saying, "A defeat does not diminish his glory or the honor he has won for our nation. He will always remain a modern-day hero for his courage and bold daring."

Ronnie Nathanielsz reports further on the story, and spoke with WBC security general Rudy Salud, who noted, of course, that since Pacquiao is fighting in Nevada, his license falls under their control. Salud also mentioned fights between Joe Louis and Primo Carnera, and Roy Jones and John Ruiz, pointing out the size differences in those battles, won by the smaller men.

I mostly just find this whole thing very interesting. We in America cannot really comprehend a single sports star being this important to our nation. Even Ricky Hatton or Tito Trinidad or Miguel Cotto or whomever -- nothing close, I don't think.

Anyway, fear not. This fight will go on.