A Golden Boy Promotions press release has set in stone the October 18 televised undercard for the Pavlik-Hopkins pay-per-view. Here's what you get for your 50 bones, if you're one of us that sits there and actually watches the undercard. (As an aside, does anyone else know these legitimate boxing fans, guys who do care about the sport, that order PPV and then do not watch a second of the undercard?) 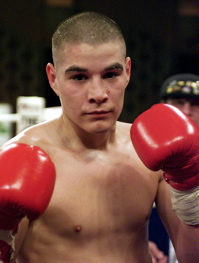 WBO featherweight titlist Steven Luevano (35-1-1, 15 KO) will return to action, making Luevano quite the headlining undercard staple. In his last three fights, he has been in the main undercard spot under Manny Pacquiao fights (Diaz in June, Marquez in March, Barrera last October), and now he gets a chance to show his stuff under Pavlik and Hopkins. Not a bad career, really.

Luevano will face unbeaten Aussie southpaw Billy "The Kid" Dib (21-0, 11 KO), a fighter the Golden Boy PR touts as having "knocked out over half the opponents he has faced," as if this is something truly remarkable. Y'know, there's salesmanship, and then there's not giving the paying boxing fan credit for much intelligence. You ever seen Dib fight? This isn't going to be a close one. Luevano had trouble in a good fight with Mario Santiago, also a lefty, last time out, but Santiago's a legit puncher and a better fighter than Dib.

Top prospect and "NABO bantamweight champion" (there's another load) Abner Mares (17-0, 10 KO) is involved in perhaps the most intriguing undercard fight, as he faces Colombian puncher Luis Melendez (25-3-1, 20 KO), another southpaw. Melendez does not have a single notable career win, but he went 12 rounds with Fernando Montiel before being knocked out last October, which was his last fight. I again caution: Beware Unheralded Colombian Sluggers. Mares is taking a real gamble with this one, even if he should absolutely be a heavy favorite.

The final televised bout will pit middleweight contender Marco Antonio Rubio (42-4-1, 37 KO) against Enrique Ornelas (28-4, 18 KO) in a WBC eliminator. I like that we'll get to see Rubio against a fairly tough opponent on a big card, because should he win, he's a mandatory for Pavlik, and has come up as a potential opponent for Kelly before. What worries me is that this already smells like an end-around. While Pavlik fights Hopkins at 170, there are plans to have him return to middleweight and defend again. Everyone wants Pavlik-Abraham. Pavlik does not need a tune-up for that. It would be a wonderful fight and has serious Fight of the Year-type potential. Both are tough, resilient guys with serious power and overlooked boxing skills. Abraham can be excellent defensively, and I'd love to see how Pavlik combats that, and everyone absolutely overlooks that Pavlik is more than a donkey kick puncher.

But if I'm calling it like I fear I'm seeing it, we're getting treated to Pavlik-Rubio next if Rubio comes away the victor, and that's only splitting hairs difference from Pavlik-Lockett, which was a joke.

All in all, not the best undercard, not the worst. Golden Boy and Top Rank did an OK job trying to line up some action fights (Rubio-Ornelas and Mares-Melendez have fireworks potential) just in case Bernard suckers Kelly into a Bernard Hopkins fight, which isn't something I blame Hopkins for, but rather fear he's still great enough to do. Don't drink the Kool-Aid, Kelly. Punch your heart out.