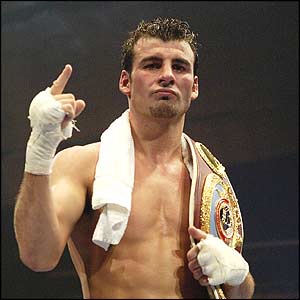 No matter what you might say about this defense or that, about fights that coulda been but weren't, Calzaghe's run with this belt was superb. I am fairly confident in saying that the WBO will never have another super middleweight titlist like Calzaghe.

Denis Inkin and Fulgencio Zuniga will fight for the strap tomorrow in Hamburg.

Calzaghe won the vacant title in a fight with English legend Chris Eubank. He unified it with Jeff Lacy's IBF title in 2006, which he defended once before vacating. He later unified the WBO title with Mikkel Kessler's WBC and WBA titles.

Here's a quick look back at Calzaghe's title reign, from the win over Eubank to the defeat of Kessler, with thanks to BoxRec.com.