Last chance for Mayorga against Mosley

Share All sharing options for: Last chance for Mayorga against Mosley 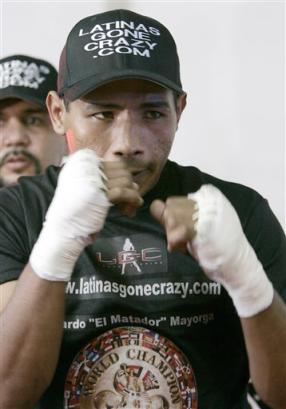 He talks, he swears, he smokes, he drinks. He sells fights. He acts like he's never been beaten senseless (assuming he has much sense to begin with) by better fighters. He acts like his genuinely notable wins go further than Vernon Forrest. He acts as if he's an unbeaten fighter of impeccable skill.

He's full of it. I'm sure he knows it. But, again, he sells fighs. And money makes the boxing world go 'round.

Oops, sorry. Is that last part discouraging you from watching?

It shouldn't. Mayorga also makes for exciting fights, even when he gets creamed, as I feel he should tomorrow night. Mosley is the slightly older man at 37, but he's also the remarkably better fighter, a quick-fisted boxer with a superb chin, light on his feet at his advanced age, and simply put, he is a lot better than Mayorga.

But Ricardo will come out swinging. He's already come out talking.

Still, at 29-6 and with memories of the Forrest wins (especially the sensational first victory) fading in favor of memories of manhandlings at the hands of Oscar de la Hoya and Felix Trinidad, how many more times can Mayorga be counted on to sell a fight? At what point does he firmly become labeled a journeyman who happened to have Forrest's number?

Frankly, I think we're at that breaking point. Though his grudge match-style fight at 164 pounds with Fernando Vargas last December turned out to be a hell of a battle, it meant nothing, and everyone knew it. Vargas had clearly been on his last legs for a little while, and never became the fighter many thought he could have been. He was essentially Mayorga, the Mexican version. Talk, talk, talk, and when it came time for the talking to end, he usually wound up taking the short end of the stick.

If Mayorga is dominated by Mosley in a fight that Shane himself has recently described as "not a big fight," then what's really left? 29-7 is not an attractive record at all. At some point, people aren't going to care anymore about Mayorga losing one-sided scraps to good fighters.

This could be it. This could be Mayorga's final chance, not at getting bigger fights, but just staying at the level he's at now. He doesn't have to win, but he has to make a better showing than he did against de la Hoya, for an example. He simply cannot afford to get dominated by Mosley. And there's a very good chance he will be.

Either way, Mosley-Mayorga is intriguing for me as a fan of both guys. I'm a fan of the two men for very different reasons. Combine it with a somewhat interesting welterweight title fight between Andre Berto and Stevie Forbes, and it's a fine two-fight card for HBO.

But a prediction? Mosley within six. It won't be close. Adios, Ricardo?